This podcast features an interview with Pastor Steve Stone of Heartsong Church in Cordova, Tennessee. He discusses his congregational relationship and extension of love for neighbor to the local Muslim community, and how this became an international media story. For additional background, see the many news stories on this, such as that in USA Today: http://usatoday30.usatoday.com/news/religion/2010-09-07-cordova06_st_n.htm.

This is a podcast of the Foundation for Religious Diplomacy (www.religious-diplomacy.org). The interviewer is John Morehead, an FRD board member and Custodian of its Evangelical Chapter.
Posted by John W. Morehead at 3:43 PM 3 comments: 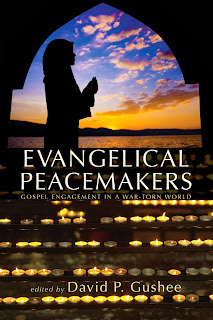 For many years Evangelicals have been distinguished as a movement that favors evangelism and missions, putting a great deal of energy and financial resources into mobilization, strategy and execution in this regard. But by and large, they have not been known for their interests and activities in peacemaking. However, this has changed in recent years, and now a growing number of Evangelicals across a spectrum from progressive to conservative, are practicing peacemaking, inclusive of what it means to share the gospel, and as a worthy goal in and of itself apart from evangelism and missions.

Evangelical Peacemakers is a new volume that is representative of recent activities in this area. It came together as a result of papers presented at the Evangelicals for Peace Summit on Christian Morality and Responsibility in the Twenty-first century, which was held at Georgetown University in September of 2012. Rick Love of Peace Catalyst International was the primary moving force behind the formation of this conference. At the conclusion of the event, Love gathered the resulting collection of papers and asked David Gushee of Mercer University to edit the material into a volume. The result provides an introduction to and overview of varying approaches to peacemaking among Evangelicals, inclusive not only of center-left positions within Evangelicalism, but also those from more conservative views on the right.

Each of the chapters in this volume is brief, reflecting the origins of the material in summit presentations rather than extended written chapters originally intended for publication. The book begins with a Preface and Acknowledgements by Gushee who provides an initial context and orientation for what the reader will encounter in successive chapters.

The first four chapters address issues related to a Christian ethic and theology related to war, particularly Just War Theory and pacifist perspectives. Gushee begins this first section in Chapter 1 with a consideration of the U.S. as “a warfare state with a bloated national security apparatus and a pattern of excessive military engagements” (xi). His chapter concludes with a consideration of Evangelical involvement in foreign and military policy discussions in this context. In the second chapter Lisa Sharon Harper of Sojourners looks at Christ’s example and teachings in the New Testament to argue for a pacifist position brought into engagement with U.S. foreign policy. Eric Patterson of Regent University takes up the third chapter with a consideration of Just War Theory where he provides an exposition and defense of this view and then reflects on how this might be connected to contemporary events in foreign policy and international conflict. Chapter 4 concludes this first section with an offering by Glen Stassen of Fuller Seminary who introduces a just peacemaking concept as an alternative to pacifism and Just War approaches.

In the second half of this volume, eleven chapters discuss peacemaking efforts undertaken by individuals as well as organizations. In Chapter 5 Geoff Tunnicliffe describes the peacemaking work of his World Evangelical Alliance. Similarly, in Chapter 6 Mark Johnson discusses the peacemaking work of his organization, the Fellowship of Reconciliation. The seventh chapter is by Joseph Cumming of Yale University who explores his peacemaking as well as mission work with Muslims. In Chapter 8 Doug Johnston of the International Center for Religion and Diplomacy argues that U.S. foreign policy must take religion seriously, particularly in the most pressing international context with Islam. David Shenk provides a discussion in Chapter 9 of the peacemaking in his Christian tradition of the Mennonites who serve in dangerous areas of conflict around the world. In Chapter 10, Lisa Gibson of the Peace and Prosperity Alliance provides an inspiring discussion of her journey of forgiveness and its relationship to peacemaking as a result of the loss of her brother in the Lockerbie terrorist bombing in 1988. Sami Awad shares his thoughts on peace and justice in the Middle East through his Holy Land Trust organization. Pastor Bob Roberts of Northwood Church describes his personal and congregational work with service, missions, and peacemaking in Asia and the Middle East. In Chapter 13 David Beasley speaks as the former governor of South Carolina about loving witness in connection with the National Prayer Breakfast. Jim Wallis of Sojourners shares examples of peacemaking around the world, and how personal relationships and networking have been helpful to this process in Chapter 14. Rick Love helps Evangelicals who emphasize evangelism consider a typology for peacemaking in Chapter 15. Finally, David Gushee completes the volume in Chapter 16 by way of critical interaction with the perspectives provided by the other contributors.

The second area of note relates to the tension that arises in sharing differences and disagreements among competing religious traditions. Shenk discusses Christian and Muslim interactions where when evangelism backfires, “the inclination is often to simply avoid the call to witness” (61). He points to a “trust-building friendship” approach of a pastor and imam in Nigeria who feel they must “avoid theological discussions, for that would put a wedge between them” (61). Although they leave space for mutual witness, they avoid discussion of theological differences. Shenk then goes on to contrast this “gingerly approach” (62) with other forms of dialogue and peacemaking where theology and differences are more prominent. Roberts brings the much-needed stance to this context that avoids the elephant in the room and which permits for deep relationships of trust. In his chapter he argues that we must be willing to recognize that “[m]ulti-faith engagement says we have fundamental if not irreconcilable differences between our faiths…So let’s be honest, not compromise what we believe, but treat one another with respect” (89). While dialogue has tended to avoid areas of conflict in seeking common ground, the more promising way forward is found in peacemaking and religious diplomacy approaches wherein irreconcilable differences are acknowledged and discussed, but done so with civility so that authenticity and transparency provides for a transformation of religious enemies into trusted rivals.

Roberts also articulates the third area of significance in this volume in the shift in forms of interreligious engagement. He argues that there needs to be a shift “from dialogue among clerics to engagement between congregations” (90). In his view as a church leader, [t]he greatest power of a pastor is to connect and release his people to engage with people of other faiths” (90). For some time now interreligious dialogue has been pursued by way of religious adherents taking a more passive role as they watch their leaders or religious professionals engage in sophisticated forms of theological exchange. Roberts states that [t]he real power is the people” (90), and there is great untapped potential for grassroots movements if clerics and professionals empower their people to take the lead in peacemaking at congregational, mosque, temple, synagogue, and ward levels with their interreligious counterparts in their communities.

The individuals, organizations, and fledgling movement of Evangelical peacemakers/peacemaking described in this book hold great promise for Evangelicalism and the world in which they live and serve. If these activities continue we agree with Gushee that “it is fascinating to contemplate a future for evangelical Christian leaders as global diplomats (a role long played by Catholic popes), and to see the gradual institutionalization of a vision for Christian engagement that includes grassroots peacemaking and conflict resolution” (126-7). Surely this is something Christ’s disciples should work toward as they seek to be obedient not only to the Great Commission, but also to receive the blessing Christ promised to the peacemakers (Mat. 5:9).
Posted by John W. Morehead at 5:02 PM No comments: