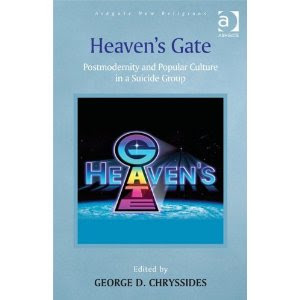 I recently learned of a new academic exploration of the Heaven's Gate UFO religious group.

Heaven's Gate:
Postmodernity and Popular Culture in a Suicide Group

On March 26, 1997, the bodies of 39 men and women were found in an opulent mansion outside San Diego, all victims of a mass suicide. Messages left by the Heaven's Gate group indicate that they believed they were stepping out of their 'physical containers' in order to ascend to a UFO that was arriving in the wake of the Hale-Bopp comet. The Heaven's Gate suicides were part of a series of major incidents involving New Religions in the 1990s, as the new millennium approached. Despite the major attention that Heaven's Gate attracted at the time of the suicides, there have been relatively few scholarly studies. This anthology on Heaven's Gate includes a combination of articles previously published in academic journals, some new writings from experts in the field, and some original Heaven's Gate documents. All the material is expertly brought together under the editorship of George D. Chryssides.

About the Editor: George D. Chryssides is Research Fellow in Contemporary Religion at the University of Birmingham. He has written extensively on new religious movements: his books include The Advent of Sun Myung Moon (Macmillan, 1991), Exploring New Religions (Cassell, 1999), Historical Dictionary of New Religious Movements (Scarecrow Press, 2001) and A Reader in New Religious Movements (with Margaret Z. Wilkins, Continuum, 2006). He has contributed to numerous academic journals and edited collections.

Reviews: 'Heaven's Gate is one of the most interesting new religious groups to emerge in the twentieth century. Virtually unknown to scholars prior to its communal suicide in 1997, it has become the focus of significant research and important analysis. This worthwhile collection of studies is the most comprehensive to date. I enthusiastically commend it to anyone interested in understanding, not just UFO religions, but also the emergence and significance of new religions and alternative spiritualities more generally.'
-- Christopher Partridge, Lancaster University, UK

For further information, or to order a copy visit the Ashgate website.
Posted by John W. Morehead at 8:49 PM No comments: 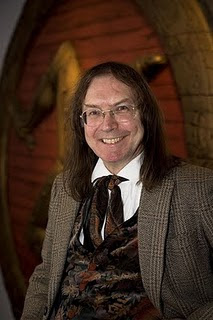 Ronald Hutton, the scholar and historian who has written significant volumes on Paganism, including Triumph of the Moon, has given an interview worth reading at Necropolis Now. Here's an excerpt:

Did you write The Triumph of the Moon to demolish the traditional history of Pagan witchcraft?

Absolutely not: I wrote Triumph to fill a vacuum created by the collapse, within Britain, of that traditional history: which is why I do not devote any space in the book to a sustained attack on that history itself. The concept of early modern witchcraft as a surviving pagan religion, which had been scholarly orthodoxy in the mid-twentieth century, began to disappear among professional historians around 1970, along with many other nineteenth-century beliefs. At the same time, many Pagan witches who had worked with founding figures of traditions, such as Gerald Gardner, Alex Sanders and Robert Cochrane, had always expressed doubts regarding the truth of what those founders had claimed about the history of those traditions. By 1990 these two developments had converged to produce a general disbelief in the origin story of modern Paganism among its British leaders. During that year (before I had published anything on Paganism myself) I attended a conference held at Kings College London at which a succession of them declared that its traditional historiography should be regarded as myth and metaphor rather than literal history. As I mention in Triumph of the Moon, this had already also begun to occur in the United States from the 1970s: Isaac Bonewits, Aidan Kelly and Margot Adler all alerted American Pagans, in different ways, to the fact that the traditional account of their historical origins was problematic.

For those interested in Pagan studies, especially the recent controversy in some quarters surrounding Hutton's Triumph of the Moon, this interview is worth a read. It can be read here.
Posted by John W. Morehead at 9:23 PM No comments: 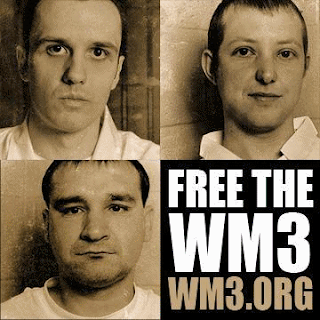 The Investigation Discovery Channel will be broadcasting the program True Crime with Aphrodite Jones with a focus on the West Memphis Three on May 5 and 8. See the program listing here. My previous interview with one of the defense attorneys in this case, Dan Stidham, can be read here.
Posted by John W. Morehead at 12:27 PM No comments: