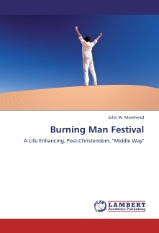 Books on Demand now includes a listing for the forthcoming book version of my MA thesis on Burning Man Festival. Please take a look at the page, and consider posting it on your Facebook profile and Twitter if to promote research in Burning Man studies and religion and pop culture.

flap text of the book
Burning Man Festival is an intentional community and alternative cultural event involving 50,000 people that meet annually in the desert of Nevada. Scholarly analysis of the festival tends to interpret it through Victor Turner’s framework of liminality and ritual. While this perspective sheds valuable light on understanding the event, other theoretical frameworks are helpful, including the “homeless mind” and secondary institutions thesis of Peter Berger, Brigitte Berger, and Hansfried Kellner used to explain the 1960s counterculture, updated by Paul Heelas and Linda Woodhead to include the turn to the self now involving life-enhancing secondary institutions. Hakim Bey’s Temporary Autonomous Zone also presents promising interpretive options for understanding this event. From these perspectives, Burning Man may be understood as an alternative cultural event that functions as a secondary institution and new spiritual outlet in rejection of mainstream institutions and religion.

The book is also available via Amazon.com.
Posted by John W. Morehead at 10:16 PM No comments:

Background
Evangelical Christians have been part of the history of religious dialogue in various contexts, including ecumenical dialogue with representatives of the branches of Christendom beyond Protestantism, as well as with world religions such as Buddhism and Islam, and more recently, the new religious movements, including Mormonism and Neo-Paganism. But among many Evangelicals dialogue has a negative reputation. It is often equated with liberalism, and as a result, to suggest that dialogue has a place among Evangelical engagement with the religions is suspect.

But in our increasingly pluralistic, post-9/11 world, religion has often contributed to social and religious tensions, and at times, even conflict. In light of this troubling scenario appropriate forms of dialogue would seem to be an important tool for not only evangelism, but also understanding and work toward peace and justice.

Yet despite the great need for dialogue, many Evangelicals are unprepared for such efforts. What type of approach is appropriate? Many groups and diplomatic strategies employ conventions that emphasize commonalities between groups and advocate “tolerance” of differences between them. The Foundation for Religious Diplomacy (FRD) claims that this is not enough – and, in fact, may work against the interests of peace.

“Merely ‘tolerating’ others can be a sign of disrespect that leads to resentment – or worse. When people feel they cannot express their most cherished beliefs in a respectful hearing, they will often disassociate from their social group,” claims Randall Paul, president of FRD. “It is vital that we provide opportunities for every one who holds strong convictions about truth or the best prescription for living well to fully share those in legitimate ways.”

According to Terry Muck, board member for FRD and Evangelical Chapter member, “Our position is that rather than discouraging this type of missional activity through dialogue, we should be about helping religious groups do their advocacy in the context of peaceful, respectful conversation and dialogue with others who are similarly committed to promoting their religious commitments.”

People with deep religious convictions believe they serve the world best by expressing their truth claims honestly and completely. Discouraging this expression in the interest of cooperation is often counterproductive to building trust between people who deeply disagree. FRD recognizes that differences and tensions can be healthy for a family, a community, or a society if people can express their deepest convictions forthrightly and without anger. This can best happen in face to face encounters with careful listening and mutual sharing of convictions and experiences.

In order to facilitate an appropriate form of dialogue that does justice to the real differences among religious traditions, and to do so in ways that are respectful, the Evangelical Chapter of the Foundation for Interreligious Diplomacy will work to develop “bi-lingual” members of the chapter through programs and activities to dialogue with particular religious groups that want to engage more deeply with Evangelical Christianity.

John W. Morehead is Director of the Western Institute for Intercultural Studies. He is co-editor and contributing author for Encountering New Religious Movements: A Holistic Evangelical Approach. He is also the editor of Beyond the Burning Times: A Pagan and Christian in Dialogue, and co-founder and editor of Sacred Tribes Journal. John also provides expertise to the Lausanne Committee for World Evangelization issue group on “The Church and the New Spiritualities.” He has been involved in interreligious dialogue in the contexts of Islam, Mormonism, and Paganism.

Michael T. Cooper is associate professor of Religion and Contemporary Culture and director of the MA in Cultural Engagement at Trinity Graduate School in Deerfield, Illinois. Dr. Cooper has contributed numerous articles and chapters dealing with the revival of Pagan religions in the West and has presented conference papers on the subject at London School of Economics, University of Bordeaux, San Diego State University as well as others. He is the author of Contemporary Druidry: A Historic and Ethnographic Study (2010) and editor of Perspectives on Post-Christendom Spiritualities: Evangelical Reflections on New Religious Movements and Western Spiritualities (2010). He is a senior editor of Sacred Tribes Journal, research fellow at the Western Institute of Intercultural Studies, and founder of the Timothy Center for Sustainable Transformation.

Gerald McDermott is Jordan-Trexler Professor of Religion and Philosophy at Roanoke College and Distinguished Senior Fellow at the Baylor Institute for Studies of Religion. An ordained Anglican priest, he serves as Teaching Pastor at St. John Lutheran Church in Roanoke. McDermott’s most recent books are The Oxford Handbook of Evangelical Theology; (with Michael McClymond) The Theology of Jonathan Edwards (Oxford University Press); God’s Rivals: Why God Permits Different Religions—Insights From The Bible And The Early Church (IVP); Mormons and Evangelicals: Exploring the Boundaries (Regent College Publishing), co-authored with Brigham Young University theologian Robert Millet; and World Religions: An Indispensable Guide (Thomas Nelson).

Terry C. Muck is dean of the E. Stanley Jones School of World Mission and Evangelism at Asbury Theological Seminary in Wilmore, Kentucky. He is the author of nine books, including Ministry and Theology in Global Perspective: Contemporary Challenges for the Church, and Christianity Encountering World Religions, co-authored with Frances Adeney.


Bob Robinson is Senior Lecturer at Laidlaw College in New Zealand, and its associated Laidlaw-Carey Graduate School of Theology. He holds the MA from the University of Canterbury, and the PhD in Systematic Theology from the University of London. He worked in Singapore for a number of years before completing his doctoral dissertation: a Christological analysis of the recent Christian-Hindu encounter now published as Christians Meeting Hindus: an Analysis and Theological Critique of the Hindu-Christian Encounter in India (Carlisle, UK: Paternoster Press, 2004). He speaks and lectures widely on issues related to the constructive defense of the uniqueness and finality of Christ and advocates the incarnational and dialogical way of Jesus as the best way of reaching out to the new spiritualities.

Loren Wilkinson joined the Regent College faculty in 1981. He has written many scholarly and popular articles developing a Christian environmental ethic and exploring the human relationship to the natural world in its environmental, aesthetic, scientific and religious dimensions. Loren’s teaching interests include Christianity and the Arts, Philosophy, Earthkeeping and his popular “Creation, Wilderness and Technology” course that takes place on a summer boat trip. His books include Earthkeeping: Christian Stewardship of Natural Resources and Caring for Creation in Your Own Backyard (co-authored with Mary Ruth Wilkinson). He is currently working on a book entitled Circles and the Cross: A Trinitarian Response to Some Contemporary Religious Movements.

Questions concerning the Evangelical Chapter of the Foundation for Religious Diplomacy (http://www.fidweb.org) can be directed to John Morehead, chapter director, at johnwmorehead@msn.com.
Posted by John W. Morehead at 8:48 PM 4 comments:

Reflections on "Faith and Doubt at Ground Zero"

This week I caught the majority of a rerun of a special edition of Frontline, Faith and Doubt at Ground Zero on PBS that looks at 9/11s impact on people of faith. If you haven't seen this, it is an amazing, emotional, and thought provoking program that made me think of my work in religious studies and dialogue.

First, there is the story of a Lutheran minister in the program where he shares his experiences after praying and participating in a multifaith memorial service in New York on Sep. 23, 2011. Unfortunately, after participating in this memorial in pastoral fashion, the minister received hate mail from his own denominational members accusing him of not only heresy, but also of being a terrorist attacking the faith he is sworn to protect. This is a reminder of the challenges the Evangelical community faces in a pluralistic environment where pastoral and dialogical issues arise concerning those of other religions.

Second, there is a comment by a rabbi that was spot on. He stated that some have looked at those who engaged in the terrorism of 9/11 and said that this is not true Islam, while others have said it is the only true expression of Islam. The rabbi feels that this is misguided. He says that the terrorists of 9/11 tapped into something in their tradition that motivated the attacks, just as members of other religions have tapped into aspects of their religious traditions as justification for violence. In his view we have to acknowledge the dark side of religion which can be both a great and motivating power for good as well as for evil. Not do to this, in the rabbi's view, is to sanitize our religions inappropriately.

Third and finally, watching this program it made me realize even more that dialogue certainly includes elements of persuasion and proselytization, but these should not be the only (or perhaps even the primary) reason for engaging in dialogue. With the world in need of understanding, peace and justice post-9/11, dialogue has far greater potential beyond our ability to persuade the other toward conversion. Unfortunately, when they are willing to consider dialogue as something beyond taboo, many Evangelicals view it as little more than another form of proclamation and evangelism, and miss out on greater opportunities for what this form of communication and relationships can achieve.
Posted by John W. Morehead at 9:39 PM No comments: