Handbook of Religion: A Christian Engagement with Traditions, Teachings, and Practices 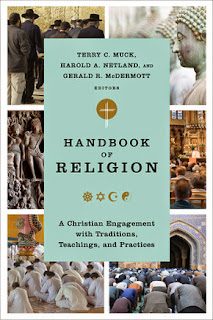 I just received my contributors' copy of Handbook of Religion (Baker Academic, 2014), edited by Terry Muck, Harold Netland and Gerald McDermott. My essays are on Paganism, including a descriptive overview, and a piece on theological exchanges and current issues. My contributions are followed by Gus diZerega's essay as an adherent of Paganism.

I think this is one of the best volumes produced to date by Evangelicals on religion. It includes a number of top notch scholars on the topic, and the tone and content is far different than approaches of the past. It also includes contributions to practitioners and adherents of various religions so that they might speak for themselves. Pick this one up.

From the dust jacket:

"This comprehensive handbook provides a Christian perspective on religion and its many manifestations around the world. Written by top religion scholars from a broad spectrum of Christianity, it introduces world religions, indigenous religious traditions, and new religious movements. Articles explore the relationship of other religions to Christianity, providing historical perspective on past encounters and highlighting current issues. The book also contains articles by adherents of non-Christian religions, offering readers an insider's perspective on various religions and their encounters with Christianity. Maps, timelines, and sidebars are included."

Posted by John W. Morehead at 8:47 PM No comments: