Questions From a Cup of Coffee 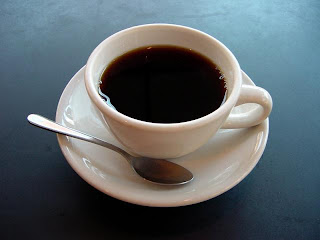 When I went to Burning Man Festival a few years ago one of the more interesting facets was a display of pictures of people holding up their written responses to the question "Why do you do what you do?" I think this is a healthy question to ask ourselves, and one which we should ask more often, particularly in church contexts.

I was reminded of this as I drove down I-15 in Utah and saw a billboard put up by a local church. The caption read "Church Caffeinated," and between the two words was the image of a large cup of coffee. My reaction to the billboard was a mixture of disbelief and confusion. For those outside of my Utah context some background might be helpful in understanding my reaction.

Nearly 70 percent of Utah's population is Latter-day Saint, and this religious subculture has a number of distinctive practices, one of which is a dietary guideline known as the Word of Wisdom that encourages members to avoid "strong drink," usually interpreted as caffeinated and alcoholic drinks. With this in mind it's not difficult to see how the connection between a local church and a taboo drink might not be well received by the local religious population. To feel the emotional force of this consider a billboard put up in the Bible belt by a local Rastafarian group with the image of a marijuana cigarette and the words "church high" used as a means of attracting new members.

In light of these considerations I wonder why the church who sponsored the "church caffeinated" billboard would advertise itself in a way that would put itself at odds with a significant religious practice of the dominant religious culture. Throughout history, as the church has expressed itself in different cultures those that are the most meaningful to these cultures are those that are contextualized, or framed in ways that reduce the "cultural distance" between those "planting" the church and those who will make up its participants.

I understand this is a fairly large church for Utah so I am trying to come to grips with their advertising audience and rationale. Perhaps the church isn't trying to communicate to the general religious culture, but instead is trying to reach evangelicals looking for a more contemporary church experience. Another possibility is that the church is aiming a portion of this marketing message toward disaffected former Latter-day Saints who might gravitate toward a symbol that opposes their former religious culture. Even with these possibilities in mind as explanations it seems curious to me why a church would use such a marketing approach, even aimed at these possible constituencies, that puts itself at odds with the local religious culture.

Maybe its time for the church in general, even when it thinks its doing something relevant and hip, to start asking itself "Why do I do what I do?" In so doing we can bring our communication strategies, and our theology, into dialogue with the cultures in which we live.
Posted by John W. Morehead at 7:44 PM

Could be reaching out to folks like grandfather who emigrated from Denmark as an LDS member.

He was fond of saying they made the rule about coffee before they let Danes join the church. LOL

Things are more polarized in Utah over Mormonism than most places I've been. There is a small, but surprisingly intense counter-culture movement in Utah that literally hates and loathes the LDS Church. I suppose it's due to feeling oppressed by a dominant surrounding culture or something. But violently hateful views of the Mormons get a lot of currency in certain subculture circles in Utah.

My guess would be that the billboard was attempting to appeal to a nitch audience.

It would seem the church in question has fallen into the same trap so many of us do where we cannot look past our own concepts of "humor" to see how something might impact others around us. The idea of using a word play to project an image of a church that is "charged up" and "awake" and "on the move" failed to consider the culture. Would the image have been more effective if the picture had been of one of the "accepted" sources of caffiene? Say a big bottle of Mountain Dew? Your qustion is well founded in having us look at the "why" in what we do.

We pass this billboard all the time on our trips to visit grandparents, we live in Idaho. I was sort of reflecting on it this morning and that led me to a Google search and here to your blog. I am a member of the Church of Jesus Christ of Latter Day Saints (LDS) - I am a convert, so there were days when drinking coffee and partying were a part of my life. No judgment on those that are there. What struck me about the sign as a Church member, wasn't the disrespect, it was the stupidity of it all. I will COMPLETELY agree that not all Mormons are nice Mormons, lol, my FIL is fond of saying that if Glen Beck were in our ward he'd flip him off each week... who is to blame? Glen Beck's brand of politics or my FIL not wanting to listen to hate. I just choose not to listen!

I figure there are rules... rules about many things. I follow the Word of Wisdom because it makes complete sense. Medical sense. As a culture in general, we want to know what will kill us but we don't want to act. I watched someone close to me die recently and everyone around her tried to tell her she was a drunk... while they all had beers in hand. There is a certain amount of "do as I say, not as I do" going on in the world. I am by no means perfect. I tell my children not to swear and I let one fly... it is a process. If we are to ever understand one another, we must break down the walls, love each other (Christ's commandment) and work toward peace. Having a chip on our shoulder will never get us there - that goes for all sides.

If you have been harmed by a church, remember that churches are run by human beings! Your own connection with God is the important part. He'll never send you down the wrong path!