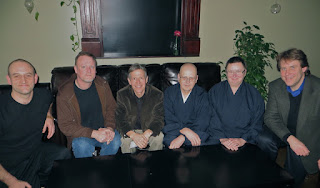 I recently returned from a very productive trip to Portland, Oregon for the Foundation for Religious Diplomacy. In my work with the Evangelical Chapter, I have not only been building that up as chapter custodian, but also serving as a master custodian, providing help to people of goodwill in other religious traditions who are as deeply committed to their religion as I am to Christianity. I am helping them build their chapters so they can prepare their religious communities for interreligious engagement in the best way possible.

One of the ways this took shape recently was with a trip to Portland. The trip, symbolized by the picture above, was like the opening line to a joke: “Three Buddhists, two Evangelicals, and one Mormon walk into a bar.” Only this story was not a joke. Instead, it is an example of a new and promising way of engaging those in other religions.

We traveled to Portland to visit Kyogen Carlson (pictured above, third from the right), a resident teacher who leads the Dharma Rain Zen (Buddhist) Center. Kyogen and his wife and co-abbot Gyokuko (second from right), will be working with a growing network of Buddhists to form the Buddhist chapter of FRD. I traveled with FRD founder and president, Charles Randall Paul (in the center of the picture), and we stayed at the monastery and discussed various aspects of chapter formation and interreligious relationships with the key elements of civility without compromise. Ejo McMullen of Eugene (first on the left of the picture) was another Buddhist and part of this discussion. We finished the day with a lunch, and Paul Louis Metzger (first on the right), who is a professor at Multnomah Biblical Seminary, and who is a charter member of the Evangelical chapter and a Senior Fellow for FRD. During lunch we had an amazing discussion about our mutual desires to see greater religious freedoms in the public square for religious discourse, but without the animosity we often aim at each other. We also discussed our mutual desires to see the others embrace our faith perspectives.

Posted by John W. Morehead at 7:02 PM No comments:

Essay and Book Reviews in Journal of Asian Missoin 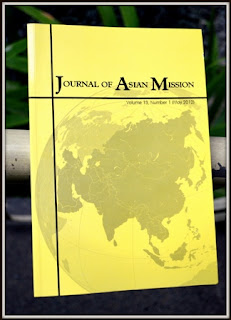 The Journal of Asian Mission published in the Philippines and edited by Anne Harper, is focusing on new religions in a special Spring edition. Two book reviews of mine will be included, as will the following essay: "Walter Martin was Wrong: A Critique and Alternative to Evangelical Hermeneutical and Methodological Approaches to 'Cults.'"

Abstract: For many decades Evangelicals in America and the West have drawn upon a “counter-cult” approach to certain religious groups. The late Walter Martin is an exemplar of this model. This “heresy-rationalist” approach involves a contrast of Christendom’s orthodox doctrine with heretical deviations, and is often accompanied by an apologetic refutation of a religious group’s doctrine and worldview. This approach can also be found outside the West, impacting places as Asia and India. But what if the assumptions of this approach were wrong? This essay describes popular Evangelical assumptions about “the cults,” both in terms of a biblical hermeneutic, and the methodology of engagement that arises from this. A critique is offered, and then an alternative hermeneutic is presented. Consideration is given to the need for sociological assessment of the effectiveness of Evangelical counter-cult methodologies, and a cross-cultural missions model is presented by way of alternative to contemporary ways of engaging various religions.


The essay can be read here, and a review of George Chryssides' Historical Dictionary of New Religious Movements, 2nd ed., can be found here.
Posted by John W. Morehead at 6:54 PM No comments: 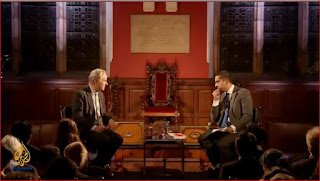 Richard Dawkins, the outspoken critique of religion and known as being part of the New Atheists, has been interviewed at Al Jezeera. Muslim journalist Medhi Hasan presents some interesting questions and holds his own quite well in what turns out to be a fascinating exchange. The interview is described by Al Jezeera as follows:

Fanaticism, fundamentalism, superstition and ignorance. Religion is getting a bad press these days. Much of the conflict in the world, from the Middle East to Nigeria and Myanmar, is often blamed on religion.

But how are things from a different perspective? Defenders of religion claim Adolf Hitler was an atheist. Communism under Joseph Stalin, Pol Pot or Mao Zedong banned religion, but also massacred millions. And science brought incredible and amazing advances, but also pollution and the atomic bomb.

A critic of religious dogmatism, Professor Richard Dawkins revolutionised genetics in 1976 with the publication of The Selfish Gene, which explained how evolution takes place at the genetic level. He has since written 12 more bestsellers, including The God Delusion which sold millions of copies, was translated into more than 30 languages, and catapulted him to the position of the world's foremost atheist.

Mehdi Hasan interviews evolutionary biologist Richard Dawkins at the Oxford Union and asks: Is religion a force for good or evil? Can it co-exist with science? Is science the new religion? And why if god does not exist, is religion so persistent?

The program might have more accurately described the key question as to how religion is both a force for good and evil rather than as an either/or, but the interview is worth watching, and is a great example of interreligious dialogue. Click the Al Jezeera page for "Dawkins on Religion."
Posted by John W. Morehead at 7:01 PM No comments: 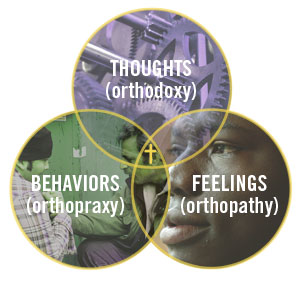 Evangelicals invest a lot of thought, energy, and time in orthodoxy, and many times orthopraxy as well. We want to ensure that we have the right doctrine and engage in the right practices and behaviors. We also spend a lot of time defending the boundaries of these as well. But somehow along the way we have grounded these in a confrontational and hostile form of orthopathy, the emotions and feelings we exhibit toward God and others.

In my latest essay on the Evangelical Channel I discuss this in a piece titled "A Generous Orthopathy: Evangelicals and a Transformed Affective Dimension of Faith."

An expert from the essay:

Orthopathy comes form the Greek word pathos. Used in a theological context, it refers to the right forms of passions, emotions, and empathies. This is the emotional and attitudinal dimension of our faith. It is my contention that in our concern for orthodoxy and orthopraxy, we end up neglecting, even violating a balanced biblical form of orthopathy, an element just as vital to the right standards of faith as the other elements we tend to emphasize as Evangelicals.

New content at FRD Blog: Religious conversations in the wake of death: 'Good riddance' or civility? 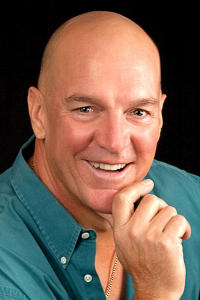 I have been working to add blog content for the new website for the Foundation for Religious Diplomacy. The goal is to not only build material for reading, but also create conversations there among people of various religious persuasions as well. One of my posts concerns the recent death of Evangelical radio personality Frank Pastore, and how one Mormon described his feelings. What might we learn from this? Here is an excerpt:


JewishJournal.com includes a blog titled "Jews and Mormons" by Mark Paredes. Paredes wrote a post that discussed Pastore's work on Mormonism and mentioned his death. After describing the way in which he died, at the conclusion of the first paragraph Paredes wrote: " In a few words, my thoughts are these: RIP – and good riddance." In the comments section I responded and I'll share the essence of my thoughts here. In my view, the statement of Paredes quoted above demonstrates precisely what's wrong, not only with Mormon-Evangelical interactions, but with interreligious interactions in general. We connect the views and work of an individual in regards to their religious tradition and how it interacts with our own, and when we bristle at the way in which they describe "us" then this translates into a demonization of them as a person (and many times their religious tradition and community too). The result is the development of a hostile faith identity within us that produces a less than civil approach toward others. Along the way we lose the ability to discuss others in positive terms, even in death as their family grapples with the loss of an individual. I strongly disagreed with the way in which Pastore described Mormonism and engaged with Mormons (not to mention Evangelicals who disagreed with his approach and advocated alternatives). But Paredes' response seems harsh and inappropriate.

Read the post here, and then please consider creating an account to leave your comments and join the conversation. Shoot me an email to let me know you applied for an account so I can expedite approval: johnwmorehead@religious-diplomacy.org
Posted by John W. Morehead at 11:02 AM No comments: