Review of The Theology of Battlestar Galactica at Colloquium

My review of Kevin Wetmore's The Theology of Battlestar Galactica: American Christianity in the 2004-2009 Television Series (McFarland, 2012) has been accepted for publication in Colloquium: The Australian and New Zealand Theological Review. The review will be published in issue 45, no. 2 in November 2013. A copy is available on my Academia.edu page.
Posted by John W. Morehead at 3:21 PM No comments:

These Aren’t the Religions You’re Looking For: Jedi Church, Postmodern Spirituality and the Christian Response 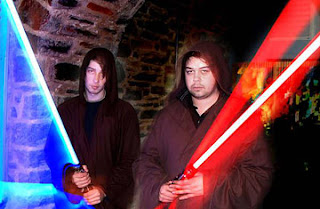 The UK census recently made a splash in the international media, but it was largely sensationalistic, focusing on the identification of many with the religion of Jedi Knight. In a guest post at Timothy Dairymple's blog at the Evangelical Channel of Patheos, I argue that Evangelicals should put this phenomenon in its broader cultural and religious context, and then offer several points for consideration.
An excerpt from the essay:


According to the Office for National Statistics in the UK, 59 percent of the population in England and Wales identified themselves as Christian, 25 percent as “No religion,’ followed by very small percentages representing Islam, Hinduism, Sikhism, Judaism, and Buddhism. Those identified as “Jedi Knight” ranked fifth on the survey, and Spiritualist, Pagan, Atheist, and various Pagan spiritualities are represented as well. Significant shifts are present in this data, with Christianity dropping from 71 percent of the population in 2001 to 59 percent in 2011. In addition, there has been a rise in those reporting no religious affiliation, moving from almost 15 percent to 25 percent. The number of Muslims also saw an increase, as did the number of those identifying as Pagans.

Given this data, it is curious as to why the media chose to focus on those identifying with Jediism, particularly since this self-identification has decreased, and there are critical questions about whether this represents a spiritual self-identification for many, or an attempt at toying with the census results.  The emphasis on the exotic spirituality of Jediism to the neglect of other elements of the survey and its broader context obscures the significance of the changing religious landscape, not only in the UK, but in the West as well.


Amidst the global crisis of a dysfunctional old paradigm, a new renaissance of human culture is underway. Over the course of 4 episodes and 23 transformational festivals around the globe, THE BLOOM: A JOURNEY THROUGH TRANSFORMATIONAL FESTIVALS explores the alchemy of themes that weave a true story of genuine hope and inspiration for our times: A new blooming of human consciousness emerging through creativity, love and joy & an emerging culture pointing the way to a bright and promising future. THE BLOOM tells the vibrant, compelling and colorful story of a cultural renaissance in progress with the artistic sensibility and inspired creativity from which the culture has been birthed.

THE BLOOM promotes the sustainability and evolution of transformational festival culture by creating a shared vocabulary & understanding of essential issues, empowering participants to contribute towards the integrity of the culture and be a part of collectively navigating its course.

THE BLOOM builds a bridge of understanding and creates an invitation to communities and allies with similar values who may find resonance with the transformational aspects of festival culture.

THE BLOOM contributes to the creation of a better world by disseminating the model created in transformational festivals to communities and audiences in many contexts.

Transformational Festivals includes things like Burning Man Festival, so I am pleased to see this research expanded and its significance explored. I would add that Transformational Festivals should also incorporate science fiction and fantasy conventions given that their participants often adopt a sense of sacred mythos, involve themselves in pilgrimage, and many times find an ethic and personal transformation through such gathers. See my previous reflections on this here.
Posted by John W. Morehead at 3:21 PM No comments: 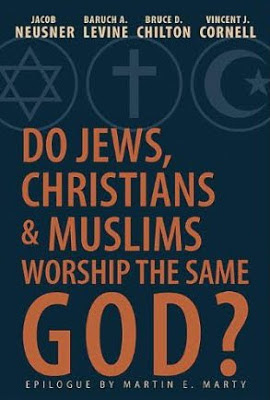 There is a new volume out that is leading to some interesting discussions on an old topic. The book is Do Jews, Christians, and Muslims Worship the Same God? (Abingdon Press), with contributions with contributions by Jacob Neusner, Baruch A. Levine, Bruce D. Chilton, and Vincent J. Cornell. Martin Marty wrote an epilogue for the volume. The book's description:


Most Jews, Muslims, and Christians are devoted and faithful. Still, on any given day, it’s difficult to avoid the vigorous and heated disputes between them, whether over the “Ground Zero” mosque, lobbying state legislatures against Sharia law, sharing worship space, dissecting the fallout of the Arab Spring, protecting civil rights, or challenging the authority of sacred texts. With so much rancor, can there be any common ground? Do they even worship the same God? And can religion, which often is so divisive, be any help at all? Four internationally known scholars set out to tackle these deceptively simple questions in an accessible way. Some scholars argue that while beliefs about God may differ, the object of worship is ultimately the same. However, these authors take a more pragmatic view. While they may disagree, they nevertheless assert that whatever they answers to these questions, the three faiths must find the will (politically, socially, and personally) to tolerate differences. Perhaps what can help us move forward as pluralistic people is ia focus on the goal – peace with justice for all.

This book is presently part of a review and discussion at Patheos, with contributions thus far from Robert Hunt, Rabbi Brad Hirschfield, and Bruce Epperly. One aspect of the volume has generated some interesting discussion, a paragraph by Jacob Neusner in the volume, where he writes:


“Interfaith dialogue is made possible by monotheism, which defines the common ground on the foundations of which debate can take place. Polytheism defines dialogue out of existence, making provision, rather, for an exchange of opinions in a spirit of tolerance.”

Hunt seems to agree with Neusner, whereas Herschfield disagrees. In my experience in interreligious dialogue with adherents of many different religious traditions, including Pagans, monotheism is not a necessary foundation. What is needed is the willingness of the participants to dialogue and to be in agreement as to the type and format of dialogue through which the conversation will develop. Hunt responds in the comments to Herschfield that


For conversation to be fruitful we do need to know what we are talking about. Let’s take “faith” as in “interfaith.” The hidden assumption in interfaith dialogue is the modern, Schleiermachian, assumption of a universal human faith in something. That faith is understood to be refracted through various religious (and sects, and personal beliefs) which, with varying degrees of adequacy (or complete equality if you wish) point toward that “Something” that is (however obscured) the universal object of faith. What Neusner’s comment points us toward is the possibility that no such universal “faith” exists. Put another way he is asserting that dialogue depends on having a common object of investigation and discussion. And he is suggesting that at least with regard to faith polytheists don’t believe that there exists a common faith to be the object of investigation and discussion and therefore can’t enter into real inter-faith dialogue. Of course polytheists will need to speak for themselves about whether that is true.

Again I disagree with Hunt, and if he understands Neusner correctly, then I disagree with him as well. Human beings have profound disagreement about what "faith in something" entails, and broad based assumptions or agreements about the nature of the transcendent as "an object of investigation and discussion" are not necessary before dialogue can begin. Indeed, these are some of the pressing disagreements that must be worked through by the dialogue process, not as a prior commitment before dialogue takes place. I hope this review and discussion at Patheos invites lots of input and commentary. I'd especially like to see my fellow FRD members, and my Pagan colleagues, provide comments on Hirschfeld's and Hunt's review essays.
Posted by John W. Morehead at 10:49 AM No comments: 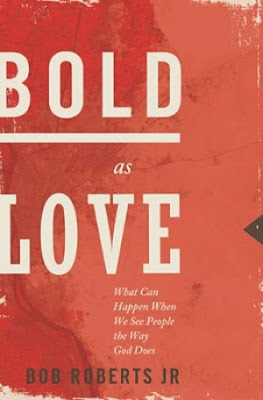 Pastor Bob Roberts's new book debuts today, Bold as Love (Thomas Nelson). Bob is one of the leading Evangelical pastors in the nation who has been involved not only in growing his Northwood Church in Texas, but also in international missions, and interreligious dialogue. When I began putting together the Evangelical Chapter of the Foundation for Religious Diplomacy, Bob was one of the first Evangelicals I encountered, and he was very helpful in steering me towards others and in modeling dialogue himself. The Amazon page for Bold as Love describes it this way:

People often think of their neighbors as those already belonging to their “tribe” or community. It’s safe, it’s easy, and it doesn’t often cause conflict—politically or religiously. But in today’s world, everyone and everything is interconnected globally in an ever-changing cultural landscape, while religious strife runs rampant. Is it feasible for Christians to live their faith boldly and lovingly while entering into a true relationship with “neighbors” of other faiths, both locally and globally? In Bold as Love, Pastor Bob Roberts shows you what it looks like to live out your faith daily in the global public square among people of other faiths—Jews, Muslims, atheists, Hindus, Buddhists. While he admits that it can be challenging to engage people of other faiths whose beliefs are as strong as yours, he demonstrates how to enter into this critical dialogue in a radical yet loving way. “We have to learn to speak with one conversation and give the same message everywhere to everyone,” he says. “We are commanded to love God and love others. And sometimes that requires risky boldness.” Roberts invites you to respond to this call to live a life of fearless and loving engagement with the world. So take the risk! Your faith wasn’t made to live in isolation. It’s something you do face-to-face, heart-to-heart, hand-to-hand. Whether you are in a suburb of Houston or a village in India, put away the fear and suspicion and, instead, answer the call to radically love others the way God loves. And get ready to see your life and the lives of those you touch—your family, your community, even your enemies—transformed!

I encourage Evangelicals and those of other religious traditions to read Bob's book. In addition to the listing at Amazon you can learn more at Bob's Facebook page, and you can see Bob discuss his book at his website at Glocal.net.
Posted by John W. Morehead at 9:08 AM No comments: