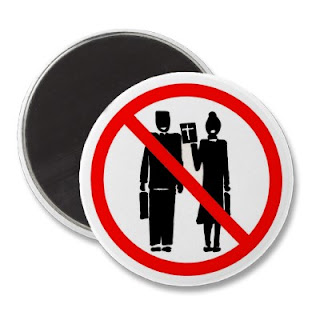 Is sharing your religious faith with another in an attempt to persuade a form of identity theft? Some certainly think so. If this is not the specific objection, some in various religious or spiritual traditions certainly see proselytism as an unethical and disrespectful of the other (as my Pagan contacts have shared with me).

This important issue that needs to be part of interreligious dialogue is taken up in an article by Thomas Farr titled "Proselytism and religious identity theft" that appeared in The Washington Post. The biographical material for Farr that accompanies this article describes him as follows:

Thomas F. Farr, a former American diplomat, is Visiting Associate Professor of Religion and International Affairs at Georgetown's Edmund A. Walsh School of Foreign Service. He is also Senior Fellow at the Berkley Center for Religion, Peace, and World Affairs, where he directs the Religion and US Foreign Policy Program.

As the article begins, Farr frames the issues and lists a number of significant questions related to the topic. He then writes:

The way these and related questions are addressed and answered will have enormous implications for American interests, justice, and world peace in the 21st century.

Farr then discusses how proselytism has gone back and forth between Christianity and Islam and eventually comes to the following conclusion:

On balance, it seems reasonable to conclude that both religion and democracy can benefit if the activity of sharing one's faith is both permitted and conducted with respect. But there is much work to do before such a conclusion is broadly accepted.

You can watch Farr discuss this topic at YouTube at this link.

I think this is a very important topic that must be addressed by adherents of various religious traditions as they come together in dialogue and consider the place that proclamation and persuasion plays in the overall dialogue process, and especially how this relates to perceptions of religious traditions of proselytism in connection with identity.
Posted by John W. Morehead at 9:09 PM 4 comments:

The latest edition of Sacred Tribes Journal, Volume 5, Number 1 (Spring 2010), is now available online. As the Table of Contents indicates below, this issue features an interesting article by Paul Markham on religious conversion in light of neuroscience, and a review of The Kingdom of the Occult by Douglas Cowan for those interested in new religions and Western esotericism, as well as previews of electronic books available at Sacred Tribes Press.

The Kingdom of the Occult - Douglas E. Cowan

Posted by John W. Morehead at 2:53 PM No comments:

The new issue of the International Journal of Mormon Studies Vol 3, No. 1 (2010) is now available online. Articles include:

Meaning and Authority in Mormon Ritual by Walter E. A. van Beek

The Religious “Other”: Reflecting upon Mormon Perceptions by Mauro Properzi

The Rise of the Nazi Dictatorship and its Relationship with the Mormon Church in Germany, 1933–1939 by Steve Carter

Religious Freedom in Belgium: A Limited Study of Challenges as experienced by LDS Children and Youth in Flemish Classrooms from the 1970’s until Today by Ingrid Sherlock-Taselaar

Utah and All These Cherries: Mormonism in Fallaci’s Un cappello pieno di ciliege by Massimo Introvigne

Oriana Fallaci, the Mormons and Me: A Personal Recollection by Michael W. Homer

Poles Apart? A Look at Mormon Doctrine in Light of Historic Christianity by Johnnie Glad

Are Jesus and Satan Brothers? A Short Exploration in Mormon Christology by John Walsh

This issue also includes Front Matter, an Editorial, and Book Reviews.
Posted by John W. Morehead at 6:59 PM No comments: