Stephen Webb on Mormon Dialogue and Alternative Rules of the Game 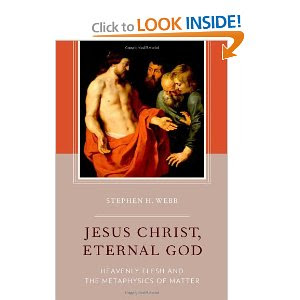 Bluntly put, Mormons do not play by the rules of the Nicene Creed. Their theological arguments can look like a form of cheating when, in reality, they are trying to change the way the game is played. Mormonism is like an alternative reality come to
life—a counterfactual history of post-Nicene developments of pre-Nicene theology, the ultimate “what if ” theological parlor game. ... Mormonism invites creedal Christians into a world where everything is slightly but significantly skewed from what they are used to. It is as if you are hearing stories you had never heard before about someone you love and thought you knew perfectly well. Better put, it is as if you had discovered another branch of your family that you did not know existed. For most non-Mormon Christians (I will call them traditional or creedal Christians in this chapter), suspicion of Mormonism runs so high that taking Mormonism seriously requires something like an intellectual if not spiritual conversion. Indeed, part of the problem is that conflict between estranged relatives can be more heated than arguments among strangers. Only a movement so close to traditional Christianity could incite such strong feelings.

Webb offers these thoughts in his chapter on Mormonism in light of his overall thesis concerning divine embodiment. But in addition, he also raises them in light of dialogue between traditional Christianity and Mormonism. So my addition to his questions would be, "What would dialogue between Evangelicals and Mormons be different if Evangelicals allowed the 'rules of the game' to change so that we discussed not only items that fit within the dialogical framework of creedal Christendom, but also the very different framework of Mormonism?"

An attempt at exploring this will be pursued in the upcoming issue of Sacred Tribes Journal where Catholic scholar Frank Beckwith, and Mormon scholar Charles Randall Paul, contribute essays that interact with Webb's thesis on divine embodiment and the contributionof Mormon theology in this regard.
Posted by John W. Morehead at 1:46 PM 1 comment:

John Dehlin of Mormon Stories Podcast has created a new website and Facebook page titled and devoted to the subject of "Why Mormons Leave." In his description of the rationale behind and purpose of this project, Dehlin writes:

I applaud this worthwhile new project and hope that it helps bring understanding and empathy for those making the journey out of Mormonism. Although Why Mormons Leave is done from within Mormon culture, it is an approach in keeping with that of our Transitions resource produced by those outside of by sympathetic to Mormon culture.
Posted by John W. Morehead at 1:44 PM No comments: