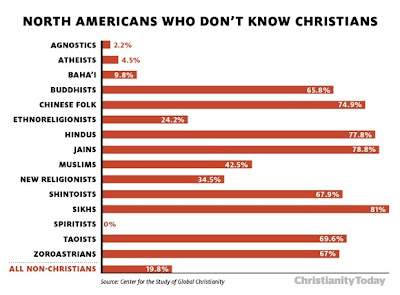 This problem is even higher outside the United States, as the article tries to address what factors contribute to this. One factor is high immigration rates of non-Christians, but the other is separation between religious groups, which is probably the most important issue because this separation is largely self-imposed. The article quotes Todd M. Johnson who speaks to this:

"The United States is a very strategic place for people to interact," he said. "It's ironic in a place with all the freedoms to interact that people don't do it. In light of the deficit of contact, what better thing could happen than to have a bunch of people move into your neighborhood and build houses of worship?"

CSGC research associate Gina Bellofatto said identifying contact between Christians and non-Christians based on location, age, and gender is "on her list" for further research. In the meantime, she notes that burgeoning movements have arisen to initiate purposeful interreligious dialogue and community service projects. They're still rare compared to the apparent apathy among Christians about befriending non-Christians, especially if it means reaching across neighborhoods and towns into more ethnic enclaves. "I don't know how many more million Muslims, Hindus, Buddhists, and Jews need to come to this country before it becomes a priority," she said.

Posted by John W. Morehead at 2:18 PM No comments:

wistv.com - Columbia, South Carolina | Members and participants of various minority religions have used the one year anniversary of the Sikh Temple shooting in Wisconsin as an opportunity to raise awareness. This video clip is from a report from WISTV 10, and the accompanying article can be read here.
Posted by John W. Morehead at 7:03 PM No comments: