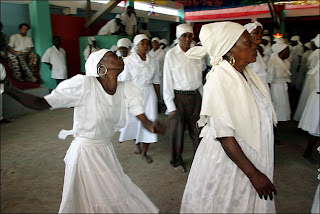 For Christians still reflecting on the earthquake tragedy that struck Haiti two recent and troubling aspects of a news story need to be carefully reflected upon in terms of our attitudes and actions toward those of other religions, particularly those that make Christians uncomfortable.

The Associated Press reports that a group of Evangelical Christians attacked a group of voodou practitioners.

"Voodooists gathered in Cite Soleil where thousands of quake survivors live in tents and depend on food aid. Praying and singing, the group was trying to conjure spirits to guide lost souls when a crowd of Evangelicals started shouting. Some threw rocks while others urinated on Voodoo symbols. When police left, the crowd destroyed the altars and Voodoo offerings of food and rum."

Some of this violence might be understood in relation to the escalating tensions that are running high, including religious ones, as a result of the devastation and deteriorating conditions in the country. But even so, this event is troubling to say the least, particularly in light of the second aspect of the story. This comes from comments made by a representative of a Christian ministry cited in the AP story:

"We would give food to the needy in the short term but if they refused to give up Voodoo, I'm not sure we would continue to support them in the long term because we wouldn't want to perpetuate that practice. We equate it with witchcraft, which is contrary to the Gospel."

The Christianity Today liveblog pursued the circumstances surrounding this quote and contacted the individual who made them. He is claiming that his comments were taken out of context and misrepresented. The reader can click here to read the blog post with the broader comments in order to assess the situation.

My hope is that these comments were not made, in any context. It seems difficult to think of any kind of more favorable context in which to find the comments more palatable. But regardless, this raises issues that Christians need to reflect upon, both in international situations where humanitarian need is met for those who are members of other religions, as well as in local neighborhoods where we rub shoulders with practitioners of other spiritual pathways.

First, we have got to figure out ways in which to seek a better understanding of the religions of others, especially with those religions that are often equated with "witchcraft." The association of voodou with the "witchcraft" of the Bible demonstrates a misunderstanding and misrepresentation of the beliefs of others, and when this is combined with the fears of "dark spiritual forces" found among Evangelicals, particularly in charismatic traditions, it is only natural that friction will result.

Second, Evangelicals need to move beyond viewing people in other religious traditions as objects for evangelism wherein the meeting of need is the means to the end of conversion. My thinking in this was stimulated most recently in reading a book that combined considerations from brain sciences with ideas related to religious conversion. Due to his perspective on human nature, as informed both by brain research and fresh biblical reflection, the author took exception to the common fundamentalist and Evangelical emphasis on "saving souls" and called for a more holistic approach that emphasized meeting human need as the Jesus story is lived out in different cultural contexts. Human beings, regardless of their religion or irreligion, are fellow image bearers of God and we come alongside of them to meet their needs as an outworking of our love for them and God regardless of whether they decide to embrace the pathway of Jesus.

I throw my thoughts into the mix for readers here, as well as for those who may weigh in at the Christianity Today liveblog site.
Posted by John W. Morehead at 12:42 PM 6 comments: 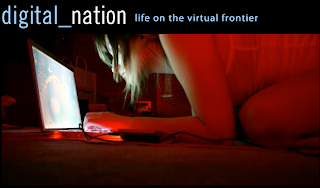 Last night I caught a great episode of FRONTLINE with a focus on "digital_nation: life on the virtual frontier." From the program's website and its summary introduction:

Within a single generation, digital media and the World Wide Web have transformed virtually every aspect of modern culture, from the way we learn and work to the ways in which we socialize and even conduct war. But is the technology moving faster than we can adapt to it? And is our 24/7 wired world causing us to lose as much as we've gained?

In Digital Nation: Life on the Virtual Frontier, FRONTLINE presents an in-depth exploration of what it means to be human in a 21st-century digital world. Continuing a line of investigation she began with the 2008 FRONTLINE report Growing Up Online, award-winning producer Rachel Dretzin embarks on a journey to understand the implications of living in a world consumed by technology and the impact that this constant connectivity may have on future generations. "I'm amazed at the things my kids are able to do online, but I'm also a little bit panicked when I realize that no one seems to know where all this technology is taking us, or its long-term effects," says Dretzin.

The FRONTLINE website for this episode includes a wealth of information, and the episode can be watched there online as well.
Posted by John W. Morehead at 6:18 PM No comments: