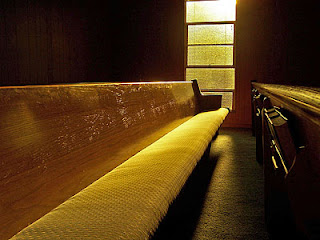 The Pew Forum on Religion & Public Life just released their new report on religious affiliation, disaffiliation, and religious reaffiliation, or the process of "religious switching". The report is titled "Faith in Flux: Changes in Religious Affiliation in the U.S.," and is a follow up and expansion to the the U.S. Religious Landscape Survey, also from Pew, which was released in 2008. The survey looks primarily at the religious switching of Protestants and Catholics and excludes respondents from certain traditions, including "other Christian," "other world religions," and "other faiths."

Overall the survey finds that "Americans change religious affiliation early and often." Some of the highlights related to this process include the following:

* Most switching occurs at an early age, usually by the age of 24. In addition, the level of religious devotion in childhood also impacts religious switching later in adult life.

* The “unaffiliated” category is an interesting one which deserves further and more nuanced analysis. It has seen a net gain in growth as one-quarter of those who change religious affiliation end up in this category. Those in this category cite disenchantment with traditional organized religion and their members as a primary reason for disaffiliation. Even so, they retain certain beliefs imparted by those institutions and may be understood as "believers but not belongers" as they have been referred to in other academic studies. The Pew Report indicates that 16 percent of the overall population falls under the unaffiliated category.

In terms of the propensity toward religious change in America the survey states that "previous estimates actually may have understated the amount of religious change taking place in the U.S.". It also reports that both former Protestants and Catholics report leaving "their former religion because they stopped believing in its teachings." These two areas will need to be examined carefully by scholars who interpret the survey results as they need to be harmonized with the results of previous sociological studies on religious affiliation and reaffiliation. For example, scholars such as Rodney Stark and Roger Finke have stated that:

"Even in the extremely diverse, unregulated, and very competitive American religious economy, most people remain within the religious organization into which they were born, and most of those who do shift from one organization to another remain within the religious traditions into which they were born - even including conversions across the Christian-Jewish divide, fewer than 1 percent of Americans convert." (emphasis mine; Rodney Stark and Roger Finke, Acts of Faith: Explaining the Human Side of Religion [University of California Press, 2000], 115.)

Stark and Finke also note that converts tend to explain their conversion due to the attraction of "particular new doctrines", however "conversion is seldom about seeking or embracing an ideology." Social scientific studies indicate that converts have a tendency to reinterpret their experience post-conversion in terms of doctrinal reasons, and while beliefs certain play a part in religious affiliation, social networks may play a greater role.

The Pew Forum Survey reveals the continuously changing nature of religious dynamics in the United States, and the significance of the issues related to identifying and interpreting religious affiliation, disaffiliation, and reaffiliation.
Posted by John W. Morehead at 1:14 PM

I really think there needs to be more differentiation between denominational switching and religion switching.

Halos and Avatars: Playing (Video) Games with God sounds like a most interesting read. I must check back here from time to time for updates on this.

Hope you are well and enjoying your weekend.

I'll keep you posted, James. I think it will be interesting. I didn't know one of my fellow LOTTD members reads my other blog! Glad we have common interests.