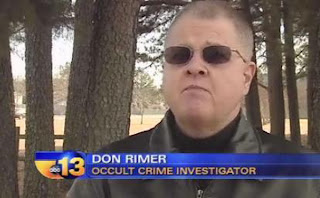 As I keep in touch with various aspects of my research interests at times I find a few surprises. In this case it came not from my direct research, but in something related to it.

I was researching the vampire subculture and checking in with a few websites related to this, as well as on Pagan websites I frequent, and found mention of a gentleman claiming to be an expert in "the occult", and using this "expertise" to lead seminars and provide consulting on "occult ritual crimes" for law enforcement, as well as the media and various civic groups. The individual is Don Rimer, and I found him mentioned on both vampire and Pagan websites as someone who keeps quite busy presenting his views on the dangers of everything from Afro-Caribbean religions to the vampire culture to various fantasy-role playing games. Given these claims I thought it was worth exploring.

My research led to me learn that Don Rimer is a retired police officer, who now presents seminars through the Oklahoma Gang Investigators Unit. His views on "ritual crime and the occult" can be found in a document on the OGIU website titled "Ritual Crime and the Occult (the New Youth Subculture)" from 2009. This document casts quite a wide net of concern, and in so doing, I detected several problematic areas, troubling in that it comes from a self-described expert, and someone providing guidance to law enforcement and thereby impacting lives in significant fashion.

Due to my concerns, yet perplexed as to why someone would present misinformation in the name of expertise and be sought out for thousands of presentations, I thought I would share some bibliographical suggestions with Mr. Rimer via email in terms of good scholarly literature that might help shape his understanding of the issue. In response, Mr. Rimer stated that he gained his accurate knowledge of the groups in question through study with Wiccans, Vampires "and those who worship Satan." He also claimed that the document at the OGIU site was an "old edition" and that he had sent them a new one to be uploaded. As of the date of this post the document I originally reviewed is still there, and the same misinformation is presented by Mr. Rimer in the name of "occultic expertise."

After my exchanges with Mr. Rimer I thought I would solicit feedback from academic colleagues of mine who specialize in these areas, as well as representatives from the religious communities and identity subcultures who are knowledgeable about the issues, and Rimer's views on the matter. Without exception, everyone confirmed my suspicions. In fact, while Rimer has had some contact with those in the Pagan community, I could not track down anyone willing to agree that he accurately describes Paganism, and his claims about learning from vampires may be limited to magazine articles and random conversations at vampire clubs as well as newspaper articles on alleged "vampire killings," hardly the stuff of good ethnographic research and scholarly study. 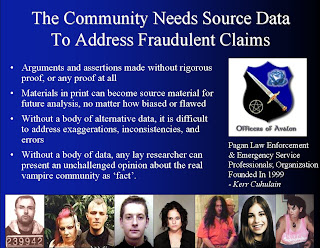 My colleagues did point me toward additional resources that discuss Rimer and his problematic views on the "occult." These include a lengthy consideration of Rimer at Witchvox (http://www.witchvox.com/va/dt_article.html?a=cabc&id=8939. In addition, I benefited greatly from those associated with the Atlanta Vampire Alliance and their research materials through Suscitatio Enterprises, LLC (http://www.suscitatio.com). These sources are worth interacting with, not only for accurate understandings of Paganism, Wicca, and the vampire subculture, but also for correctives to Rimer's misinformation on these and other subjects.

It is not necessary to repeat the critiques of Rimer offered in the sources mentioned above, and others that can be found online, but I would like the reader to come away with the following:

Problematic terminology and definitions
Rimer uses the term "occult" not only in a pejorative manner for various expressions of Western esotericism, but also as a blanket term for a diverse group of unrelated religions, spiritualities, and identity subcultures.

Imagined connections
Rimer makes inappropriate connections between various elements to alleged "ritual crime." Of course there are crimes, sometimes very grisly, but isolated cases of crime are not necessarily connected appropriately, nor do they flow out of, the groups he describes as dangerous.

Unfamiliarity with scholarship
Rimer is unfamiliar with the good body of academic materials on this subject matter, as well as the related to topic of satanic panics. In fact, in comments made to me he seems to hold academics at a distance and privileges his lay approach at "expertise." He doesn't have to be a scholar, but he should be familiar with the academic material related to the subjects he's instructing others on.

Counter-cult influences
Rimer also appears to be influenced by Protestant evangelical counter-cult approaches to the subjects he lectures on, which tends to lump diverse phenomena together with a primary concern that whatever religion or spirituality that is non-Christian is somehow connected to the demonic.

Despite the serious flaws in his approach, and the misinformation contained in his presentations, Rimer continues to be sought after and provides input to law enforcement, including training on how to identity alleged occult ritual crime. One of his most recent cases took place in Chesapeake, Virginia, where a woman was arrested for killing pigs and burglarizing a church. Thankfully in this Wavy.com story Rimer is quoted as (rightly) saying that there is nothing to link the woman with satanic worship. But Rimer's strange understanding of the things he labels as "occultic" will eventually lead him to mislead law enforcement, perhaps hampering the arrest of real criminals, or leading to the arrest of innocent people in the fervor of satanic panics.

My advice to law enforcement and other civic groups is to seek out responsible sources of information for their knowledge of religious and spiritual groups, as well as identity subcultures. Mr. Rimer seems more like a merchant of fear than an occult expert.
Posted by John W. Morehead at 7:23 PM

I can tell you from personal experience, Don's an idiot. He has made life hell for all those who are a little different down here in Va. He makes wide claims he cannot back up, the pagan community hates him (and refuses to work with him anymore). I've got more info and blogs on this guy in the works.

"Idiot" is being kind. Rimer is worse than an idiot. He's a dishonest, slanderous charlatan who has discovered that people will pay him to give them a nice little bogeyman/scapegoat bundle deal that they can be frightened and titillated by at the same go, and will let them feel better about being ignorant bigots in the bargain.

If you haven't already read it, a wonderful resource to recommend to anyone in law enforcement (or anyone, really) is "The Law Enforcement Guide To Wicca" by Kerr Cuhulain (Canadian Wiccan Detective Constable Charles Ennis).

I think i'm not the only one with "stakes" in this, thumbs up from many of us in the vampire community.

going place we go, is not walking in our shoes, Storybooks and movies does not make this yahoo an expert in anything. I will personally seek a legal outing of this guy.I am sure there is more support for the vampire community and the truth to some of these misconceptions. as they should be considered slander and liable where he is concerned.
D, ,

I've tried to out this guy as a fraud to my local police Dept. If u check my blog you can see how that went. I'm considering going to the local press with how much of a waste of tax dollars Don's seminars are. I need other voices willing to back me up.

@ Disgruntled: read over the letters and response from Chief Harmon; left a comment on the blog entry.