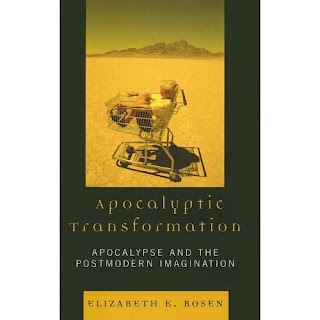 Fears and scenarios concerning the ultimate End of things are far more broad and diverse in the late modern West than the Left Behind novels of evangelicalism and popular culture. Elizabeth Rosen discusses this topic in Apocalyptic Transformation: Apocalypse and the Postmodern Imagination (Lexington Books, 2008), one of the most enjoyable books I have read in a while.

Rosen begins her discussion with an introduction into apocalyptic thinking. She notes that just as human beings need origin stories or myths to explain our beginnings, so we also incorporate stories of the End in order to come to grips with the threats of the end in the face of social chaos and the finality of the human story. She also draws the reader's attention to the fact that stories of the End are sense-making myths that serve as "an organizing principle imposed on an overwhelming, seemingly disordered universe." Used in this fashion, apocalyptic stories function much like conspiracy and chaos stories.

In the history of the Western world the Judeo-Christian apocalyptic has been the most influential. In that religio-cultural context one of the key apocalyptic texts has been St. John's Book of Revelation. In that piece of literature the Greek word for apocalypse refers to an "unveiling," literally meaning a revelation provided to the reader as a means of providing a sense of peace and purpose to the seeming chaos and social disruption surrounding them. In contemporary popular usage the term "apocalyptic" has moved beyond this specific meaning to serve as a general phrase referring to the End. Although the Judeo-Christian apocalyptic continues to be popular in various circles, and to exert influence outside of its specific religious context, other visions of apocalypse are found throughout popular culture. Here the context of late modernity or postmodernity puts an interesting twist on apocalyptic myth as it seeks to, as Rosen states, "reject the myth's absolutism or [to] challenge the received systems of morality that underlie it."

Having laid her foundation through the Introduction Rosen then explores differing ways in which apocalyptic myths have been explored in popular culture. Given my personal and academic research interests I appreciated the diversity of cultural sources that she drew upon in consideration of apocalypse, including graphic novels, books, and film. Several case studies in Rosen's exploration were of great interest to me. These include a look at Alan Moore's graphic novel Swamp Thing, which Rosen describes as "a veritable collection of apocalyptic stories," a differing apocalyptic twist in Moore's Watchman graphic novel, Terry Gilliam's films Brazil and 12 Monkeys, and the Wachowski Brothers' Matrix trilogy of films.

Each of Rosen's chapters include a number of interesting ideas for reflection, and while I found several things worth pondering in each chapter referenced in the preceding paragraph, perhaps the most interesting for me was her discussion of Terry Gilliam's apocalyptic. Previously I was unaware that this talented film director and former member of the Monty Python comedy team was raised in a religious family, and that the biblical stories have a continuing influence on him. Although he views the Bible's imagery, symbolism, myths and moral framework very differently now than he did as a child, Gilliam still draws upon aspects of a biblical world view that is now deconstructed and reimagined. In one particularly striking section of her discussion of Gilliam's apocalyptic, Rosen writes:

And just as the deities in these postmodern recastings of the apocalyptic myth are sometimes doubting and unsure, Gilliam, too, has identified his films as part of his own search for meaning.

If you look at everything I've done ... they're all trying to discover the truth....Perhaps they're really trying to find out what the question is. I used to think I had the questions and it was just the answers I was searching for. But the older I get, the more lost I feel, which stimulates more questioning.

As I read through Rosen's book it seemed to me that many evangelicals are likely not even aware of the popularity of apocalypse in the postmodern imagination, and in the variety of ways in which the Judeo-Christian apocalyptic is being deconstructed and reconstructed, and new apocalyptic visions are being created in popular culture. Perhaps rather than merely consuming a fictional form of evangelical Dispensational apocalyptic we might broaden our awareness of other visions for the End (whether conceived in linear or cyclical fashion), in order to consider how differing visions of the New Jerusalem speak to the late modern imagination.

Thanks fo your thoughts, Mat. You'll find my application of this to Terminator Salvation in an article I wrote recently for Cinefantastique Online.