Not My Child: Contemporary Paganism, Youth Culture, and Evangelical Monstrosity 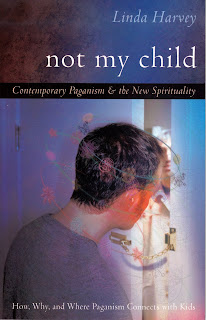 In my Internet research recently I discovered a new book that addresses Paganism and youth, Linda Harvey's Not My Child: Contemporary Paganism and New Spirituality (Living Ink Books, 2008). The publisher was kind enough to send a copy for my review, and over the weekend I had an opportunity to thumb through the volume. It includes an introduction and six chapters that present an all too common conservative evangelical perspective on youth interest in Paganism, the core tenets of Paganism, spiritual consequences of Paganism, the dangers of a Pagan lifestyle, and suggestions on what parents can do in interacting with their teen on Paganism in contemporary society.

Unfortunately, this book is just what I feared it would be, yet another alarmist and poorly researched volume that in my view will do little to help Christian parents and young people understand Paganism in America and the West. Some of the problems I noted in the book included alarm bells over aspects of popular culture allegedly influenced by Paganism, including not only the evangelical whipping boy Harry Potterbut also Buffy, Sabrina, and Charmed, and also Internet videogame World of Warcraft, the cartoon and card games Pokemon and Yu-Gi-Oh!, Christopher Paolini's dragon fantasy books Eragon and Eldest, and various forms of animation including Sailor Moon and Hellboy. Japanese animation, or anime, was also pointed too as an example of a genre "suffused with sorcery as a core activity." As this book addresses various facets of popular culture unfortunately no effort is made at putting forth a recognition of fantasy and fairytale where all types of mythical creatures exist in a magical context that involve little to no connection to real-world spiritualities and religions and their practices.

The author also decries the formation of various school clubs that are cited as alleged examples of the rise of Paganism and the ways in which it is making inroads into youth culture. These include anime clubs, Dungeons and Dragons, Harry Potter, and the card game Magic: The Gathering clubs.

In one section of the book subtitled "Pagan Rites vs. Christian Rights" conflicts in the public square between Christianity and organizations like the ACLU and the People for the American Way are deplored, and there is mention of the Veterans Administration decision to allow pentacle symbols on gravestones for Pagan soldiers, but this is framed as if preferential treatment is given to Paganism while Christianity is losing ground. There is no mention of Christianity's continuing dominance in the public square, or acknowledgement that Christians might consider supporting pentagram headstones for Pagans out of a sense of fairness and respect for the burial rights/rites of others.

In one especially disconcerting section of the book, under the subtitle "Reimagining Western Civilization," the author discusses the 1692 Salem witch trials in Massachusetts as an example of where "an increasingly disproportionate amount of class time is spent on subjects that distort history." Unfortunately, neither the brief discussion on this topic nor the bibliographical materials cited to support it give much evidence of depth or breadth in consideration of this unfortunate aspect of American Christian history, and the author never offers an apology for the inappropriate actions of her spiritual forebears that continue to impact Pagans and Witches and Christian relations with them.

In her discussion of the dangers of Paganism Harvey points toward her concerns over the "explosion in 'body modification" as a shift, in her view, toward a more tribal form of culture. One of the forms of body modification that concerns Harvey is piercing, and yet I wonder whether the author herself, or perhaps her children, have their ears pierced and yet they don't think twice about such practices or connect them to tribalism and Paganism. Harvey is correct in noting that there is a retribalization going on in the West, and that the growing interest in body modification is significant, but more sober assessments of the cultural social significance of such trends are needed that move beyond the alarmist tone adopted by Harvey. (For an interesting video documentary analysis of this topic [defined differently than Harvey has mind] see Modern Tribablism: Uncovering America's Primitive Soul (low-fi filmworks, 2001); and for an academic exploration see Michel Maffesoli, The Time of the Tribes: The Decline of Individualism in Mass Society [Sage Publications Limited, 1996].)

As her chapter on the dangers of Paganism continue Harvey includes a discussion of Burning Man Festival:

"Amid exhibits of avant garde art and sculpture are drumming, drugs, chaotic music, and sexual abandon. There are no rules, except the most minimal to ensure safety. The climax is the burning of a gigantic person figure in a rite of simulated pagan worship."

Unfortunately, the only source Harvey cites for her research on Burning Man is a reference to the festival's website. No further bibliographical sources are cited, including the few academic explorations of the festival and alternative culture. Harvey gives no indication of having engaged in participant observation for her research on the festival either. Thus, it is not surprising to see the mischaracterization of the festival with an emphasis on the more salacious aspects that tend to surface in sensationalized media treatments. Sadly, Harvey has followed the trend of the media and has not taken the time to dig deeper as to the variety of meanings of the festival or what its increasing and continued popularity might say back to Christians, particularly in light of the feelings of some Burners that this alternative culture represents an alternative to "Christian-inspired, bore me to death" society. 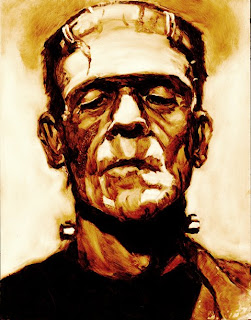 Evangelicals and the Monsters We Create

I was seriously disappointed by this book, and when I considered that another recent book by evangelicals in the form of Generation Hex (Harvest House, 2008) comprise but the latest of a long line of shallow and sensationalist treatments of Paganism, it led me to reflect on evangelicals and the monsters we create. Jeffrey Cohen edited a book titled Monster Theory (University of Minnesota Press, 1994) with the idea that "Monsters provide a key to understanding the culture that spawned them. So argue the essays in this wide-ranging and fascinating collection that asks the question, What happens when critical theorists take the study of monsters seriously as a means of examining our culture?"

Just like other parts of society we evangelicals in our subculture create our own monsters. One of our leading monsters at present seems to be Paganism. Islam and homosexuality are other creatures in our laboratory. I wonder why we create them. That we do can hardly be denied when we consider the plethora of books we write on the topic and the sensationalist tone that often accompanies them.

One of the tricky things about monsters is that they often come back to haunt their creators. Sometimes they ask us some thorny questions too. Consider Frankenstein's monster, stitched together from corpses by his master as a means of empowerment. Dr. Frankenstein is quickly repulsed by his creation for which he wishes to take no responsibility. The rest of Mary Shelley's story is devoted the disastrous results of Frankenstein's creation, not only in Frankenstein's decision to create such life, but also in his later refusal to take responsibility for it. At one point the creature asks the docttor why he was created. If our production of monsters in film, television, and books tells us something about ourselves, to the extent we are willing to be critically reflective, what does evangelical monstrous creation and resultant fear of stereotypical Paganism tell us about ourselves? I'm afraid if we reflect on this monster we may not like the answers.
Posted by John W. Morehead at 1:01 PM

John, I believe that your application of "monster theory" to this phenomenon is very apt. I hadn't heard of it before. In Jungian terms, what the authors of books like Not My Child appear to be doing is projecting their Shadow onto "the other," perhaps because they see in the other something about themselves that they don't want to acknowledge.

I, myself, have given up on attempting to dialogue with people like this, since dialogue is simply not possible with people who believe that they possess the final, definitive truth, and that everyone else is either deluded or evil, or quite possibly both. I simply suggest that they find a good psychoanalyst and try to find out what it is about themselves that causes them to become so exercised about Paganism.

John, thank you so much for your willingness to refrain from demonizing Pagans, and to stand as a voice of reason among your brethren. We really are nothing to be afraid of--we do not evangelize or recruit, we do not entice children or young adults away from their Christian homes. I think it's heartening to see young people seeking out their spiritual sides, but I would never, EVER recommend Paganism to a young person who should be looking to their parents for spiritual guidance, and I know that it is common practice among Wiccans to send young seekers back to their churches until such time as they are adults, and able to autonomously determine their own spiritual paths. We are not a threat, we do not wish to close down the Christian church, we are not here to spread the Pagan word. All we would ask would be to be allowed to live in peace with our Christian neighbors, and you do much towards that end when you assure your brothers that we are not anything to be afraid of. Bless you.

I agree with much of what Beth said, though my personal approach to young seekers would be slightly different. (I would be inclined to ask a young seeker to bring her parent(s) with her so that all of us can discuss her spiritual interests together. After all, even some Christian parents are okay with their children exploring other spiritual traditions, and I wouldn't rule out the possibility of offering some recommendations to a young seeker until I actually found out where her parents stand on such matters.)

Linda Harvey's name rings a bell, but I can't place her. Do you happen to know what organization(s) she might be affiliated with?

Thanks to everyone for sharing their comments.

Harvey is with an organization called Mission America. I discovered the book through a letter from the organization promoting the new volume.

I had intended to post my gratitude on this thread when I linked to it from my blog about it, but alas some things are not permitted from my office connection.

I'm glad that you show the links to references in other forums.

Anyway, my motivation is emphatic: I'm a social activist for pagan community, and I am heartened by your balanced approach and willingness to offer criticism. As an insider, you have both the knowledgeable perspective and the familiar voice to make those points I try to make, too often in vain.