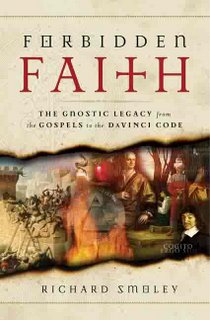 I recently went to my local library to pick up a couple of books on the changes in American spirituality from that associated with institutionalism and place to that of a personal quest orientation. As I was leaving, the library display of books caught my eye. It was a collection of books associated with The Da Vinci Code, but a book on Gnosticism engaged my curiosity. I ended up checking it out, Richard Smoley's Forbidden Faith: The Gnostic Legacy From the Gospels to the Da Vinci Code (HarperSanFrancisco, 2006). The dust jacket for the book describes Smoley as the editor of Gnosis magazine, and co-author of or author of several books on esotericism and "inner Christianity."

Smoley writes in popular fashion and provides an overview of the history and varieties of Gnostic thought. He looks not only at ancient forms of Gnosticism but also traces it to more recent times in what he calls the "Gnostic Revival." This chapter, along with Gnosis and Modernity, and The Future of Gnosis, represent some of the more interesting treatments as he traces neo-Gnostic elements in various facets American culture, including pop culture as exemplified by The Matrix films and The Da Vinci Code.

It should come as no surprise to either traditional Christians or those supportive of various forms of neo-Gnosticism that I disagreed with portions of his book, particularly his discussion of the canonical Gospels and his claim that none of them were written by eyewitnesses. Smoley also speculates that the Gnostic Gospel of Thomas might indeed be dated earlier than the second century due to its alleged resemblances to the hypothetical Q document, and therefore it might be the first gospel and represent some of the earliest expressions of the faith of the early Christian communities. A blog is not the place to rehash these debates, but suffice it to say I believe the weight of scholarship runs counter to Smoley's claims. Hopefully traditional and "inner Christians" can continue to not only debate but also to discuss our differing views in these areas.

The book also includes other troubling areas when Smoley describes the evangelical emphasis on a personal relationship with Christ as little more than a mental construct that represents a relationship with an imaginary friend. But before evangelicals get too upset we need to consider Smoley's reminder that, "As harsh as this characterization may sound, it is in many ways milder than the accusations flung by many evangelical Christians at the spiritual experiences of others, which (insofar as they are granted any reality at all) are frequently dismissed as delusions engendered by demons."

Despite these disagreements, traditional Christians should take note of several items in this book. For example, Smoley touches on the shortcomings of Christian clergy that reveals problems in the education and contemporary cultural awareness of Christian clergy:

"A modern priest or minister might be well schooled in the theology of Bultmann, Tillich, and Karl Barth and may be intimately familiar with the question of the Q document and its strata of composition, and yet find himself at a total loss when a parishioner has seen an angel."

Here Smoley touches on Western Christendom's tendencies toward emphasis on the rational elements of faith, on doctrine, and on the history of Christianity in the West, but its frequent inability to address the experiential elements, specifically within the contexts of the shift away from preferences for an institutionalized form of faith and toward a spirituality of quest with the increasing influence of Eastern and esoteric spiritualities. Such insights demonstrate that it is time for our seminaries and other Christian educational institutions to broaden their theological educational focus in light of changing cultural circumstances in order to address our shortcomings. It appears that we need to prepare less for educating chaplains in Christendom culture and instead prepare missional apostolic types for cultural engagement as well as pastoral care.

How can we explain the increasing interest in neo-Gnosticism, often more readily accepted than the institutionally and modernity connected Chrisendom? Smoley notes that the reasons are multiple and complex, but he states that one of the reasons seems to be perceived shortcomings and a loss of vitality in Christianity. He uses the illustration of an egg with the yoke and white sucked out of the inside leaving only the shell. While it still looks good on the outside, the inner vitality is gone and the remaining shell is fragile. Might the interest of growing numbers of Westerners in forms of neo-Gnosticism be due at leas in part to our failures to live out and put forward a robust form of the spiritual path of Jesus?

Finally, Smoley concludes the book with a discussion of faith, reason, and gnosis (inner knowledge). He interacts with the insights of Wouter Hanegraaff, a noted scholar of esotericism in the West. Hanegraaff states that Western civilization is rooted in the "three major impulses" of reason, faith, and gnosis:

"Reason holds that 'truth - if attainable at all - can only be discovered by making use of the human rational faculties, whether or not in combination with the senses.' Faith, by contrast, says that reason in itself does not provide us with ultimate answers, which can only come from a transcendental realm and are encapsulated in dogmas, creeds, and scriptures. Gnosis teaches us that 'truth can only be found by personal, inner revelation. . . .This 'inner knowing' cannot be transmitted by discursive language (that would reduce it to rational knowledge). Nor can it be the subject of faith . . .because there is in the last resort no other authority than personal, inner experience."

Hanegraaf notes that the scientific enterprise has valued reason, while institutional Christianity has valued faith, although these are not mutually exclusive categories and institutional category has valued faith within an epistemological framework that also places great value on reason . Hanegraff notes that gnosis has been much less valued. While I disagree with the characterization of gnosis in the quote above, opting instead for forms of inner experience that provide one but not the only means to truth, and which can to some extent be described and transmitted by discursive language, thus removing the gnosis-rationality dichotomy, I am sympathetic to the notion that Western Christianity has not valued inner experience, or a form of gnosis if you will, as much as it should. Might it be possible for missional and culturally engaged Christians to rethink and rework the relationship between reason, faith and a form of Christian gnosis? Perhaps if we can it will bring us closer to recapturing a more biblical form of faith, and put some of the substance and vitality back into the shell of Christianity.
Posted by John W. Morehead at 11:54 AM

As the author of Forbidden Faith, I was of course very interested to read Mr. Morehead's review. I certainly wouldn't expect an evangelical Christian to agree with everything in it, but then I wouldn't expect anyone to agree with everything in it. Nonetheless I found it extremely fair-minded. It's actually the most thorough and intelligent review the book has received so far.

The connectivity and interaction provided by the Internet never ceases to amaze me. I never thought that the author of a book I commented on would come across my blog, but I am thankful for Mr. Smoley's comments. There are some evangelicals who are trying to thoughtfully and fairly engage issues in contemporary culture, and hopefully this bodes well for future exchanges between traditional and neo-Gnostic Christians.

I would agree with Mr. Smoley's comments. I am surprised to find someone evangelical having fair minded opinions. I assumed from previous experiences such could not be, much less interested in the ideas of Cultural Creatives (vis a vis your guest essay on Phil Wyman's site).

You mentioned an interest in a gnosis 'which can to some extent be described and transmitted by discursive language, thus removing the gnosis-rationality dichotomy.' In case you are not aware of the author and work. I recommend Frithjof Schuon and his work "The Transcendental Unity of Religion." (T.S. Eliot called this the best work of its kind he had read). The following is from the Preface:

""The transcendent character of metaphysical knowledge makes it independent of any purely human mode of thought... philosophy proceeds from reason (which is a purely individual faculty), whereas metaphysical knowledge proceeds exclusively from the Intellect. The latter faculty has been defined by Meister Eckhart as follows: "There is something in the soul that is uncreate and uncreatable; if the whole soul were this it would be uncreate and uncreatable; and this is the Intellect.

"Since purely intellectual knowledge [the Intellect he states elsewhere is the direct link to the Absolute in us] is by definition beyond the reach of the individual, being in its essence supra-individual, universal or divine, and since it proceeds from pure Intelligence, which is direct and not discursive, it follows that this knowledge goes not only infinitely further than reasoning, but even goes further than faith in the ordinary sense of the word. In other words, intellectual knowledge also transcends the specifically theological point of view, which is itself superior to the philosophical point of views, since like metaphysical knowledge it emanates from God and not from man; but whereas metaphysic proceeds wholly from intellectual intuition, religion proceeds from Revelation. The latter is the Word of God spoken to his creatures, whereas intellectual intuition is a direct and active participation in divine Knowledge and not an indirect and passive participation, as is faith. In other words in the case of intellectual intuition, knowledge is not possessed by the individual insofar as he is an individual, but insofar as in his innermost essence he is not distinct from the Divine Principle. Thus metaphysical certitude is absolute because of the identity between the knower and the known in the Intellect.

"Intellectual knowledge proceeds neither from belief nor from a process of reasoning – it goes beyond dogma in the sense that... it penetrates its internal dimension... In order to be absolutely clear on this point we must again insist that the rational mode of knowledge in no way extends beyond the realm of generalities and cannot by itself reach any transcendental truth; it may nevertheless serve as a means of expressing supra-rational knowledge.... This resemblance.. is due to the fact that all concepts once they are expressed are necessarily clothed in the modes of human thought.... it makes use of rational modes of thought as symbols to describe or translate knowledge possessing a greater degree of certainty than any knowledge of the sensible order.”

I am also a sort of Christian Gnostis writer... not pagan, but more theosophical. I have written a book called “The Light of Life” and it really is for Christians such as yourself. I would be very interested to know what you thought of it. My website is www.drummlight.com and on the Book Preview page you can read free about 7 or 8 pages of the work to get a feel for it. I hope you will do so simply because I think you may enjoy it. It is written for Christians, and in the main text uses only traditional Christian sources to make its argument.