Andrew Walls: Don't Know Him? You Should! 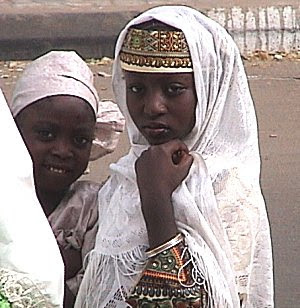 Christianity Today magazine for February 2007 has a number of interesting articles. On the I think is worthy of consideration relates to Andrew Walls, the noted mission historian connected in the past with the University of Aberdeen, University of Edinburgh, and most recently with the Overseas Ministries Study Center. The article is titled "Historian Ahead of His Time," with the interesting subtitle "Andrew Walls may be the most important person you don't know." He is the author of a number of books, including The Missionary Movement in Christian History: Studies in Transmission of Faith (Orbis Books, 1996), and The Cross-Cultural Process in Christian History: Studies in Transmission and Appropriation of Faith (Orbis Books, 2002). Walls has, perhaps better than anyone else, helped explore the significance of the global shift in Christianity from the Northern to the Southern Hemisphere, and also the significance of African Christianity.

The following quotes seemed especially significant to me and relevant to missional work among new religions and alternative spiritualities, as well as a broader cultural, missiological, and theological perspective in the West.
First, consider an example of Walls' teaching in Nigeria as it relates to the history of the expansion of the church across cultures:
In Walls's second year home, he presented a lecture to the combined divinity faculty of the four Scottish universities, comparing the Church of Scotland to its "daughter," the Presbyterian Church of Nigeria. He also offered the first version of what he would eventually call "the Martian visit." (You can read a later version in Walls's remarkable collection of essays, The Missionary Movement in Christian History.)
In it, he imagines a space visitor who comes to earth to study representative Christians over the centuries. He begins with Jewish believers in the first century, fond of large families and still worshiping in the temple. He then jumps ahead to Roman Empire believers, horrified at the idea of animal sacrifice and expecting church leaders to be celibate.
On a third visit, he meets Irish Christians standing up to their necks in ice-cold water reciting psalms. Then come English Christians of the 18th and 19th centuries, whose idea of holiness is not ice-water asceticism but activism for missions and against slavery. Lastly, he visits Nigeria in the 20th century to meet white-robed Christians dancing and chanting in the streets, claiming to be cherubim and seraphim. What, Walls asked, do they all have in common?
Walls had begun to see churches in Africa and Scotland as part of a bigger story. How is the faith transmitted and transformed across cultures? Through what process does the rationalistic faith of Scottish Christians become the visionary, supernaturalized life of Nigerians?
This summary dramatically illustrates the diversity of cultural expression of the church through history. This is a reminder for me as an American evangelical of the need to appreciate the body of Christ in this diversity, to be willing to learn from these other expressions, and to be hesitant before assuming my cultural expression of the faith is the only appropriate or orthodox form.
Evangelicals believe in the conversion of individuals, but Walls began to see that conversion refers also to nations and communities. Did not the Great Commission command the discipling of the nations? "Conversion to Christ does not isolate the convert from his or her community," Walls says. "It begins the conversion of that community. … [D]iscipling is a long process—it takes generations. Christian proclamation is for the children and grandchildren of the people who hear it."
How might the American evangelical tendency toward individual conversion, almost to the neglect of broader community and cultural perspectives, be influenced by fresh biblical and historical reflection along the lines of Walls thoughts above? I recall being at a conference where I heard someone bring harsh criticism against an article a colleague of mine had written on mission among Iglesia ni Cristo where the author stated that group dynamics which worked through leadership were more effective than apologetic efforts aimed at individual evangelistic prospects. The critic viewed this as unbiblical, indicating that the cultural assumptions of American evangelicalism were confused with biblical theology. And Walls' comment should also call into question our tendency toward extraction evangelism. Might it not be possible to leave new Christians within their cultural frameworks from among the new religions while creating indigeneous expressions of Christian community and church within this culture rather than extracting individuals and transplanting them in more monochrome types of evangelical churches in the West?
Another quote from the article on Walls:
Not only that, but Walls's study of Paul's letter to the Ephesians suggested that each culture adds new riches to an understanding of Christ, so that "the whole measure of the fullness of Christ" (Eph. 4:13) becomes possible only when bringing all of our different communities together. Each culture asks different questions of the gospel, and as new answers to those questions are unearthed, they enrich our understanding of the greatness of Christ. The second-century church asked philosophical questions that would never have occurred to Jews in Jerusalem. One result was the fourth-century Nicene Creed. Africa asks questions about witchcraft that children of the Enlightenment can't answer. Perhaps a new understanding of Jesus' victory over evil is in the works.
This paragraph was refreshing on two levels. First, Ephesians was referenced in regards to its theological and missiological implications beyond spiritual warfare. The overemphasis on spiritual warfare as a means of approaching the new religions, and the use of warfare and military imagery, are troubling for me. I recently read an evangelical statement concerning an evangelistic project which was referred to as a "stealth bomber" going behind "enemy lines." Are fellow human beings following the pathways of new religions combatants that we target with our weapons or fellow human beings created in the image of God for whom Christ died? Second, this quote reminds us that each generation brings new questions and challenges which requires fresh theological and cultural reflection. This takes us beyond minor modifications to Reformation theology and reminds us of the need to reflect currently and globally.
And the final quote:
While some scholars such as Philip Jenkins emphasize a shift of power from Western churches to those south of the equator, Walls sees instead a new polycentrism: the riches of a hundred places learning from each other.
Great idea, and one which I support, but I wonder when this will translate into our evangelical theological educational institutions, and the seats of our churches. Are American evangelicals prepared with humility to recognize that perhaps the page in the history of Western Christendom has been turned and the time has come to learn from our global brethren? I'm skeptical, but I can also hope.
Posted by John W. Morehead at 11:18 AM

An intriguing analysis. Tis article is a must read for those interested in various cultural expressions of faith, and in seeking new ways to contextualize the Gospel. It is encouraging and beneficial to return to our biblical and historical examples of world missions.

I share your skeptic optimism John in regards to the ability of the West to lay down its pride when it comes to it's prestige in the eyes of the world missions movement. Sadly, it would seem our capacity to spread the Gospel throughout the nations has by far been surpassed by many other nations. All the while, we continue to send missionaries into the field on short term trips that are no less than vacations where we spread the gospel of Western Supremacy.

We have much to learn from our Christian brothers and sisters from over the entire globe.

Thanks for your thoughts, Scott, and for being one of the willing learners in the West.

I met Andrew Wallas at a church history conference in Rome in 2002, on Rescuing the memories of our people, and apart from papers read, enjoyed enormously stimulating discussions with him over late-night coffee.

One of the problems with Western mission bodies, though, is that even when they have become convinced that paternalism in mission is wrong, they impost their nonpaternalism in a paternalistic way. Old habits die hard.

Thanks for the comments, Steve. I think you are sadly right. But what a privilege to have been able to meet with him and enjoy some conversation over coffee.