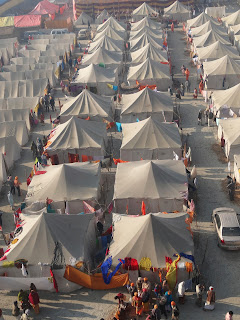 Today I stumbled upon an interesting comparison of Burning Man Festival with the Kumbh Mela festival in India. The contrast at Fest300 by Chip Conley is largely through photographs accompanied by some commentary, but the contrast of these transformational festivals across cultures is worth taking a look at for those students and scholars of religion and festival culture. The photo above is taken from the site with the author's comments:


I know Burning Man founder Larry Harvey didn’t have Kumbh Mela in mind when the he first burned an effigy on the beach in San Francisco. This blossomed into a festival dedicated to using art as a means of one regenerating oneself, but the similarities are uncanny and say something about the commonality of enduring human ritual. Here’s a few Kumbh Mela pictures considered from the viewpoint of Burning Man.

I am very interested to learn more and more about indian festivals and culture. Your site is very much helpful to give us latest information on kumbh mela ujjain.