Last night I had the privilege of visiting the Khadija mosque in Salt Lake City. Salt Lake City is home to at least 20,000 Muslims. The mosque's imam, and a representative of the Islamic Society of Greater Salt Lake, spent some time with me and my small group including members from two different churches. We had a great time, and put down a foundation for future conversations and hopefully ongoing relationships. We will be returning in June or July to be a part of their Ramadan celebration.

Posted by John W. Morehead at 2:58 PM No comments:

The Good Samaritan and the Compromise of Convictions 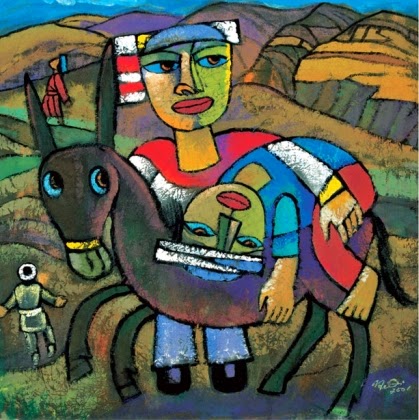 Jesus' parable of the Good Samaritan is one of the most powerful of his illustrations regarding love of neighbor, and it provides an important foundation for how to engage others in a multifaith world. But at the same time, popular interpretations of the story rob it of much of its subversive power.

Rebecca Trotter has written a piece on her blog "The Upside Down World," that steps back to reassess this story in light of a statement that Evangelical often make in relating to others: "You don't have to compromise convictions to be compassionate." On the surface this sounds good, particularly for those of us working in multifaith contexts where conservative Evangelicals are concerned that such efforts are risky, and leave practitioners open to compromise. But Trotter reminds us that the parable of the Good Samaritan challenges this idea. Sometimes you do have to compromise convictions to be compassionate.

Consider the familiar story again. When the priest and the Levite saw the injured man, they made a conscious choice not to help as acts of faithfulness to their religious convictions, particularly those related to fears about ritual impurity and contamination. But the conclusion of Jesus' story indicates that the one who truly loved neighbor in God's way was the one who ignored these religious convictions and offered aid anyway.

This should give Evangelicals pause for reflection. Our religious convictions concerning how we relate to and engage others in our multifaith world should not be cast aside casually, but there may be times when love of neighbor trumps these convictions. At the very least, we should be willing to engage in more theological self-reflection in such matters.

The interaction under scrutiny is not only between the imaginary and ‘real’ world but also between the online and off-line one, and this revitalises the study of popular religion through its involvement in popular culture and in new social media technologies such as Facebook and Twitter.

Works presented in this series move beyond text analysis and use new and ground-breaking theories in anthropology, communication, cultural studies, religious studies, social philosophy, and sociology to explore the interrelation between religion, popular culture, and contemporary society.

Book proposals are invited for research monographs and edited collections that fit within the series’ scope and themes. Please email your initial book proposals to the Series Editor.