Tomorrow is October 1, and with this month comes an increased focus on Halloween by evangelicals. Radio programs, websites, and books will raise serious concerns about the holiday, and the things they usually associate with it. In order to get a jump on the critique I present the following quote by historian Ronald A. Hutton from his book The Stations of the Sun: A History of the Ritual Year in Britain (Oxford: Oxford University Press, 1996), 383-4.

"An attack upon the celebration of Hallowe'en, especially in schools, correspondingly developed in the late 1980s, and continues at the time of writing ... It has been organized by evangelical groups in Protestant denominations ... and rests upon two arguments. The first is that Hallowe'en is a glorification or glamorization of evil powers. The second is that it is essentially unchristian ... a Christian feast of the dead is thoroughly embedded in the history of Hallowe'en and that its legacy is usually impossible to distinguish from that of paganism in the practices and associations of the night. It is of course maintained by what is still by far the largest of the world's churches, the Roman Catholic. To describe the feast as fundamentally unchristian is therefore either ill-informed or disingenuous."

"Atheists and agnostics, Jews and Mormons are among the highest-scoring groups on a new Pew Forum survey of religious knowledge, outperforming evangelical Protestants, mainline Protestants and Catholics on questions about the core teachings, history and leading figures of major world religions."

In many ways there is nothing new in this as it is part of the problem of religious illiteracy in America as individuals know little of other religions, including their own. See my previous discussion of this topic with Stephen Prothero. What is surprising is to find Mormons scoring higher than evangelicals with the former tending to emphasize the Book of Mormon and other LDS scriptures rather than the Bible in their devotional life.

Pew's discussion of the survey can be read here, and the quiz can be taken here. The Salt Lake Tribune contacted me for a local perspective on this issue in Utah, particularly as it relates to Mormons and evangelicals. See the article by Peggy Fletcher Stack for quotes and perspectives of evangelicals, Mormons, and atheists. 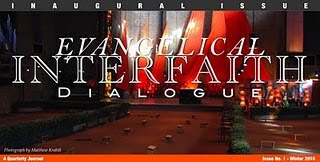 Evangelical Interfaith Dialogue, Issue 1.3 (Summer 2010) is now available for download. It includes a description of and interaction with Richard Mouw's ideas related to convicted civility in relation to interreligious dialogue. The issue can be downloaded through the journal's web page.
Posted by John W. Morehead at 12:25 PM No comments:

See my essay on this topic in Religion Dispatches.
Posted by John W. Morehead at 12:47 PM 2 comments:

Religion Dispatches Essay - "I Believe You're Wrong: The Trouble With Tolerance" 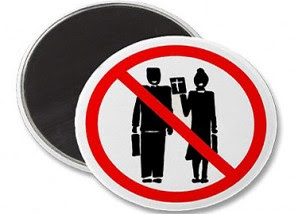 I co-authored an essay with Charles Randall Paul of the Foundation for Interreligious Diplomacy titled "I Believe You're Wrong: The Trouble with Tolerance" with the tagline "A personal recipe for peaceful co-resistence with religious rivals." The essay appears in Religion Dispatches, and it represents a unique effort by a Protestant and Mormon scholar coming together to address religious disputation in the public square with the New York City Muslim community center and mosque controversy as the application.
Posted by John W. Morehead at 4:20 PM No comments:

Tension Among Evangeicals Over Beck "Off the Reservation" 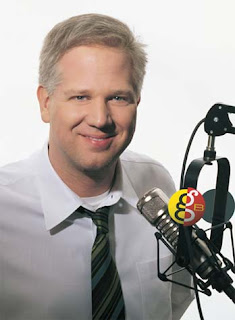 Julie Ingersoll, Associate Professor of Religious Studies at the University of North Florida, has an interesting article in Religion Dispatches titled "Evangelical Tells Beck He's 'Off the Reservation'". The article describes a recent episode of an evangelical radio program hosted by Brannon Howse who expressed concerns that radio talk show host and Fox Television host Glenn Beck is trying to lead folks astray and into Mormonism. Howse is quoted as expressing his concerns in this way:

"He has swerved into theological and doctrinal realm in the last few weeks. He’s said things on the air that makes my skin crawl. . . a ‘works based’ theology that is based in Mormonism. . . . We are not serving the god of Mormonism that says you can be like God… a religion that said Jesus and Satan were brothers. . . . Leave your pagan—your cult—religion. . . ."

Of course, it didn't help that Howse's guest was Ed Decker, an extreme member of the evangelical counter-cult community with the organization Saints Alive who has specialized in painting caricatures of Mormonism, literally in the case of his film The Godmakers which used animation (an art form associated with children's entertainment in the West) to depict Mormon sacred history and beliefs.

Howse has gone even further on his website, arguing that Beck is not only opening the door for seduction by Mormonism, but Paganism as well. He continues his warning for fellow evangelicals.

Even so, many evangelicals like Howse seem to be willing to set aside theological differences for now given agreement over the political and moral state of the country. However, it remains to be seen how long this will last, and whether the Ed Deckers and Kirk Camerons of Protestant evangelicalism and fundamentalism will become more vocal and issue calls for these camps to distance themselves from Beck.

This interesting situation is part of a historical animosity between evangelicals and Mormons, which may have been tempered in recent years by the decline of the religious right, younger evangelicals who find doctrinal disagreement with other religions a lower social priority than a previous generation of evangelicals, the ongoing evangelical-Mormon dialogue, and a greater willingness to allow political agreement to have priority over theological disagreement. With a possible Mitt Romney presidential bid it will be interesting to see how the Beck phenomenon plays a part as a backdrop.
Posted by John W. Morehead at 11:10 AM 3 comments:

Email ThisBlogThis!Share to TwitterShare to FacebookShare to Pinterest
Labels: Mormonism 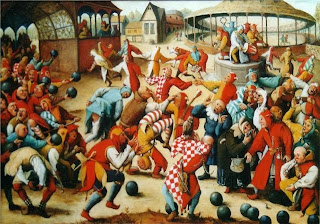 A friend and ministry colleague of mine attended Burning Man Festival recently and has been posting his photos and a few observations on his Facebook profile. The latest profile update mistakenly identified Burning Man as neo-pagan, and asked why the festival included a strong emphasis on festivity. This has led to my posting several comments on my own in response, correcting the claim that Burning Man is neo-pagan, and borrowing from an argument by Peter Berger in A Rumor of Angels that play and festival can serve as a "signal of transcendence."

Today I received an email from Max Harris informing me of his book Sacred Folly: A New History of the Feast of Fools (Cornell University Press, forthcoming). This book will update and correct remarks Harris has made previously about the Feast of Fools in his book Carnival and Other Christian Festivals: Folk Theology and Folk Performance (University of Texas Press, 2003). As I have argued previously in my masters thesis on Burning Man, and in several posts on this blog, western evangelicalism would do well to reflect on the importance of festival and play in connection with ecclesiology and worship and how the historical Feast of Fools, properly understood in its historical and ecclesiological contexts in the past, might be recontextualized in certain subcultural contexts for the present.

See my previous interview with Harris on Carnival and Other Christian Festivals here. Related to Harris's forthcoming book is his article "A Reassessment of the Feast of Fools: A Rough and Holy Liturgy," See also my post "Burning Man and Play Theology."
Posted by John W. Morehead at 3:26 PM No comments: 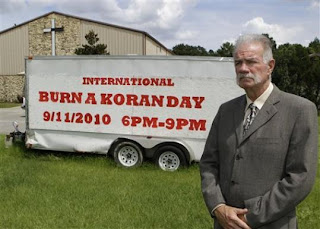 Religious conflict has dominated the national discourse for several weeks. For a while now the proposed building of a Muslim community center and mosque in lower Manhattan has dominated national airwaves of radio and television. But the last few weeks have seen a shift of discussion to a focus on a small church in Gainesville, Florida where Pastor Terry Jones planned on burning Quran’s on September 11 as a protest to the Muslim world. As this post was written news broke that Pastor Jones canceled the controversial event.

Public clashes between Christians and those of other religions is, of course, not merely an American phenomenon. A while ago the Associated Press reported that a group of Evangelical Christians attacked a group of voodou practitioners in Haiti as they gathered publicly to pray, sing, and conjure spirits in order to make offerings. According to their report Christians shouted at the voodou practitioners, threw rocks, and urinated on the voodoo objects. Whether the New York City controversy, or that of Haiti, surely emotional considerations are at play, with the former coming from the damage to the national psyche as a result of the terrorist attacks of 9/11, and the latter in response to a natural disaster. But something else may be at work here. In an increasingly pluralistic world, adherents of various religious pathways are encountering each other as never before, and at times these encounters result in a clash of ideas. Recent examples of this clash between Christianity and other religious traditions provide opportunities to reflect on attitudes and theologies toward other religions. Concerning the reactions of the Christian converts from voodou in attacking the artifacts of their former religion, at times converts react strongly to the religion of their past in light of new religious commitments. We see a similarly strong public statement made by those who converted to Christianity out of ancient magical traditions in Acts 19:19. It should be noted that this passage was used by Pastor Terry Jones as the scriptural foundation for his plans to burn Qurans. But a careful reading of this passage demonstrates that the pastor and his congregation engaged in a misreading. In the Acts passage the new Christian converts burned their own implements of their former religious ways as a result of a public statement about their new faith in relation to the old. The Christians who led them to embrace a new religious pathway did not burn their magical texts as a means of protest or a form of evangelism. Beyond this Christians might also consider that the New Testament also points out that it is possible to maintain a good witness and to do so without blaspheming the deities of other religions, or desecrating their religious items, and that this can provide a positive testimony for the gospel (Acts 19:37).

It is likely that clashes between American Christians and members of other religions will continue in the future for a number of reasons. But a better way forward beyond talking (or shouting) past one another, public protests, and the desecration of religious artifacts and symbols, and our theologies of conflict, involves new theologies and praxis that include respectful forms of religious disputation and dialogue.
Posted by John W. Morehead at 6:23 PM 1 comment:

Posted by John W. Morehead at 6:17 PM No comments: