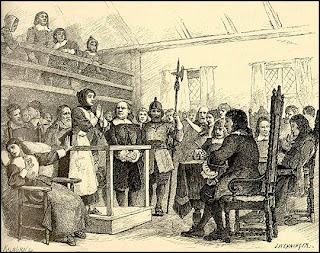 The January 2015 issue of the International Bulletin of Missionary Research explores the topic of "Witchcraft and Mission Studies."Essays exploring this topic include:

"Putting Witch Accusations on the Missiological Agenda: A Case from Northern Peru by Robert J. Priest

"Beyond the Fence: Confronting Witchcraft Accusations in the Papua New Guinea Highlands" by Philip Gibbs

"Toward a Christian Response to Witchcraft in Northern Ghana"by Jon P. Kirby

"Witchcraft Accusations and Christianity in Africa" by J. Kwabena Asamoah-Gyadu

As an Evangelical who has researched and written on Witchcraft in the West academically, who has engaged Witches in relationships and conversations, and who has called for work to address human rights abuses in South Africa and elsewhere in relation to accusations of Witchcraft, I'm glad to see IBMR address this topic. I have yet to read the issue and am a little nervous about how sympathetically it will be explored, but some of the comments from J. Nelson Jennings in the opening editorial give me hope:


"Contemporary Europeans and North Americans may blush at the early modern witch trials in Europe and in Europe’s North American colonies. Accordingly, modern Western theologians and missiologists have for generations conveniently turned a blind eye to such phenomena, which have been rumored to take place elsewhere. In actuality, however, witchcraft-related activities—including violent witch hunts directed toward women and children—stubbornly plague Christian communities all around the world. Missiologists must catch up with these acute, long-neglected spiritual and pastoral issues."

In order to read this issue you must register your email address for free. You can find the publication at http://www.internationalbulletin.org/archive/all/2015/1.
Posted by John W. Morehead at 7:29 PM 5 comments:

EID journal - Mission and Dialogue: A missing element for consideration

There is a new edition of Evangelical Interfaith Dialogue journal available, the Fall 2014 edition. It focuses on "Mission and Dialogue: Critical Conversations for a Global Church." This issue includes a number of contributors from around the world, including not only Evangelicals, but also a Roman Catholic. Many of the pieces are thought provoking as Evangelicals consider the relationship between mission and dialogue.

One element is missing in my view, and that is recognition that some religious traditions view Evangelical participation in dialogue with suspicion as merely a covert for of mission and proselytizing. I have been accused of this by some Pagans, and it is helpful for Evangelicals to be aware of this concern, and to articulate the separate activities of mission and dialogue, when they may overlap, and how this might relate to those in religious traditions who see mission as incompatible with interfaith dialogue.

This edition of EID can be read here.

Posted by John W. Morehead at 1:41 PM No comments: